Livestock news from across the U.S. 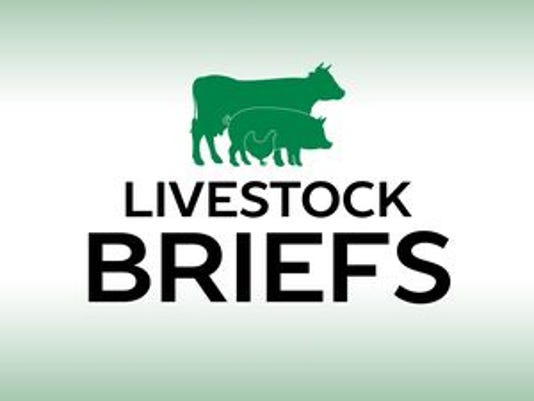 Federal officials have released a cattle grazing plan for central Idaho's Craters of the Moon National Monument and Preserve that immediately came under fire from an environmental group.

The U.S. Bureau of Land Management's Final Environmental Impact Statement released Friday allows cattle grazing on nearly all of the roughly 275,000 acres it administers in the monument.

Western Watersheds Project says the plan will lead to declines of sage grouse and their possible elimination.

Meanwhile, the Trump administration earlier this month listed all 735,000 acres of federal lands in the monument dating from 1924 as up for possible revocation.

Twenty-six other U.S. monuments on the list only go back to lands designated since 1996.

A jury has been selected in a more than $1 billion defamation case over ABC news reports on a South Dakota meat producer's lean, finely textured beef product, which critics have dubbed "pink slime."

Opening statements are set for Monday. The Sioux City Journal reports that a panel of 12 jurors and four alternates was seated this week.

ABC stands by its reporting. It says in court documents that it accurately presented views and information from "knowledgeable sources on a matter of keen public interest."

The trial is scheduled to last until late July.

A cattle farmer in western North Carolina has been sentenced for dumping cow manure in a river. Local media report that 65-year-old Michael Crowell was sentenced in U.S. District Court in Asheville on Thursday to six months of house arrest and fined $10,000. Crowell also will be on probation for three years.

Crowell had pleaded guilty in November to violating the federal Clean Water Act. In that plea, Crowell admitted he installed bypasses on his farm which discharged animal waste into a tributary of the French Broad River.

Court documents say the dumping occurred in November and December of 2015.
Crowell Farms did not have a permit to discharge liquid waste into the waters. The farm has more than 150 cows and manages more than 200 acres of agriculture fields.

A nonprofit representing ranchers with Nebraska feedlots has requested a federal judge to rule the Nebraska Livestock Brand Act unconstitutional and prevent the state from enforcing it. The Nebraska Beef Producers Committee filed a lawsuit against the Nebraska Brand Committee and executive director William Bunce in U.S. District Court on May 30, the Lincoln Journal Star reported.

The Brand Committee records ranchers' brands, inspects cattle to verify ownership and investigates missing livestock and cattle rustling. The Brand Act requires cattle being moved outside a designated brand area or sold within it to be inspected.

Katherine Spohn, attorney for the beef producers, said the evolution of the cattle industry has rendered the regulatory scheme codified in the Brand Act ineffectual and obsolete in its ability to protect the interests originally intended by the Legislature.

She said waiting for inspectors can lead to weight loss to cattle, loss of revenue and sometimes lost contracts. She added that some members paid between $75,000 and $90,000 in brand inspection fees for 2016.

State wildlife officials say a mountain lion believed to have killed a calf on a ranch in far northwestern Nebraska has been shot and killed. The Nebraska Game and Parks Commission said that officials confirmed a male cougar killed the calf on land near Hay Springs.

The landowner contacted commission officials after finding the calf carcass. The commission says game officials and the landowner then found and killed the cougar.
State officials say it's the second confirmed instance of a cougar killing livestock in Nebraska in modern times. The first happened in 2014.

Mountain lions are native to Nebraska, but vanished in the late 1800s after settlers began poisoning and hunting them. State officials have estimated there are now about two dozen or fewer mountain lions in Nebraska.