Bob Justman extended the body length of his IH tractor just to accommodate an automatic transmission, something he says makes it easier for driving in parades. The Chevrolet engine in the tractor is fueled with diesel that is stored in the Budweiser beer keg mounted in the front of the tractor. (Photo: Gloria Hafemeister)

IXONIA – Vintage tractor shows aren’t just about getting a lot of old-time farm equipment together to display.  They are about stories, creativity, mechanical skills, challenges, and fun.

The Ixonia Vintage Tractor Expo, May 27 - 28, at Firemen’s Park in Ixonia, was just that.

Visitors came for a variety of reasons. Some came for the flea market where they could pick up modern crafts and also parts for their antique equipment or tractors, collectible items, antiques, and items featuring various brands of farm equipment.

There were also crafts with an agricultural emphasis. The popular train display brought to the show by Harvey Ziemer of Watertown, featured all the agricultural parts of his vast train collection for visitors to view.

Additionally, there were miniature displays of farms featuring the old and the new.

New tractors and farm equipment rode the flat cars of the trains and a model farmstead was set up next to the railroad featuring equipment that likely made its way to the dealer via the railroad.

Outside, International Harvester brand equipment and tractors were featured. Visitors were surprised to find that, while it appeared as a sea of red equipment, there is a story behind each piece. 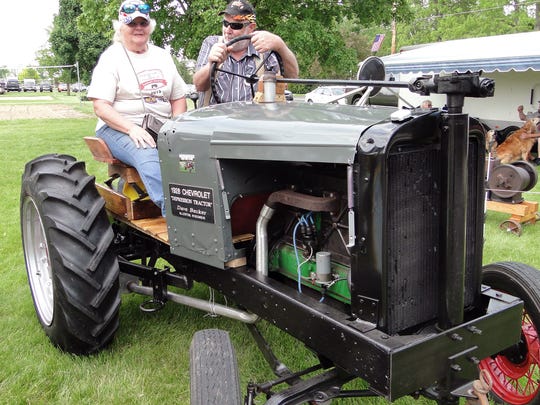 Dave and Barb Becker enjoy visiting farm shows, like the Ixonia Vintage Tractor Show, with the Depression era tractor that he built using parts from a Model A Ford car, a Chevrolet truck motor and body parts and any other parts that he had lying around his shop at Allenton. Becker says he tried to keep the parts in the 1928 era when many farmers had to take left over parts and make their own tractors because they did not have money to purchase the tractors that were just making the scene in agriculture. The tractor includes a wooden seat and platform so two people can ride.  (Photo: Gloria Hafemeister)

Many of the collectors seek tractors like the ones they remember driving in their youth. Others prefer a particular brand and seek to find a variety of models.

The Ixonia Park was filled with all of them and if you could find the owner there was a story behind them all.

Off to the side a bit, away from the featured brand, was one that looked a little different than any other tractor. That’s because it was a “depression tractor” as its owner, Dave Becker, called it.

“I tried to use all 1928 era parts when building this tractor from scratch,” says Becker who built it in his shop at Allenton. “That makes it more authentic.”

He built the frame and used a 1928 Chevy motor, a hood from a Model A Ford car, a rear-wheel transmission from a Ford truck, and other old parts.

He says that’s the way a farmer, without money, would have built a tractor back in a time when farmers didn’t have any money and horses were going out and tractors were coming into agriculture.

He included a wooden seat and platform so his wife, Barb, could ride with him when they show off the tractor at events like the Ixonia Vintage Tractor Show.

The event was well attended. Rain on Sunday morning went away just in time for the activities.

Mike Mudeks John Deere tractor stood out among all the red tractors at the Ixonia Vintage Tractor Expo on Saturday and Sunday in Ixonia where International Harvester brand was the featured line of equipment. He put the red 168 hp International engine in his 1947 John Deere A tractor, as he said, Just to be different. (Photo: Gloria Hafemeister)

The show also included several tractor parades with 37 tractors participating in the initial, day-long ride to the show on May 26.

There was a consignment auction and the IH collector’s club held their meeting at the show.