Readers sound off on tragedy that claims the life of toddler 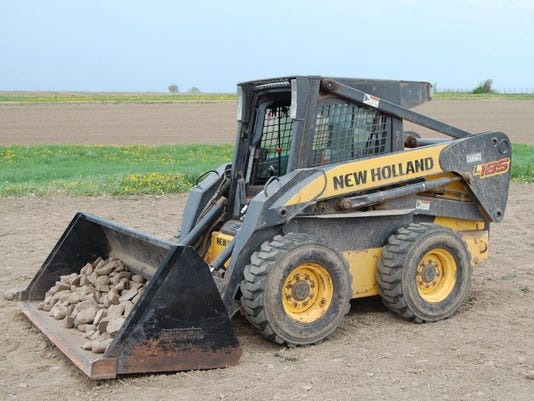 A 5-year-old Clark County boy was driving this skid loader while helping his mother and his 3-year-old brother when he accidentally ran over his younger brother, killing the toddler.(Photo: Clark County Sheriff's Department)

The headlines are heartbreaking.

A 3-year-old boy was killed after being run over by a skid loader operated by his 5-year-old brother, just one day after Mother's Day.

The outpouring of sympathy from readers was expected; the outrage over the incident was understandable, especially considering the age of the farm machinery operator involved in the May 15 incident.

"My kids were raised on a farm and they had age appropriate responsibilities," one reader wrote on the Facebook page of one media outlet. "Around harvest time they were  not even allowed beyond a set point for their own safety."

According to the Clark County Sheriff's Office report, the 5-year-old Loyal boy was driving a skid loader in a field about 30 miles northwest of Marshfield while his younger brother and mother were picking up rocks and putting them in the bucket of the skid loader.

The 3-year-old boy bent down to pick up a rock between the front tire of the loader and the bucket. The 5-year-old didn't see his little brother and accidentally ran over him, investigators said.

"Five is too young to run the skid loader - 10-12 maybe but not five," said a reader, adding that they also live on a farm. "Our son learned at 11 to drive a skid loader under the watchful eye and direction of my husband but certainly not with toddlers around. That is just irresponsible parenting. An accident, yes. A mistake, yes. But a costly one."

Unfortunately, children dying in farm accidents is a common tragedy. According to the National Children's Center for Rural Agriculture Health and Safety, every three days a child dies in an agriculture-related incident.

"Farms are often homes as well as worksites. While the average operation is expanding in acreage and herd size, there are still many thousands of small farms with families engaged in farm work on a daily basis," Weichelt said.

The agrarian traditions of families working side by side tilling the soil, milking cows, and tending other livestock are strong and deep.

"As a fifth generation farmer, I can attest to the rooted tradition of cultivating the next generation through hands-on training and involvement. Yet, age-appropriate work with a focus on safety is critical, or there may not be a next generation to hand the farm to," he said.

Lastly, a lack of safety regulation in agriculture – any other industry has strict laws in place regarding child labor, including a minimum age of 18 for operating skid steers.

The number of skid loaders (often called skid steers) used in agricultural work continues to increase. The use of these compact, multi-use machines requires coordination and maturity to operate.

"There is absolutely a false sense of security with skid steers and tractors that have cabs. However, it’s important to note here that most of the skid steer incidents that I have reviewed from AginjuryNews.org involved a bystander who was run over or was riding in the bucket and fell out," Weichelt said. "Keeping young children out of the worksite is the best prevention tip I can offer to address skid steer safety for youth."

Since 2011, there have been several incidents from Central Wisconsin involving children and skid loaders.

During an interview, Amanda Smith said she commiserated with the mother of the Loyal brothers involved in the May 15 incident, saying her own children were involved in a similar scenario - albeit with a happier ending.

Smith told the reporter she had been running an errand when she received a frantic phone call that her 8-year-old had run over his younger brother with the skid loader. Luckily the younger child survived.

Smith noted in the interview that the National Farm Center's recommendation that only children ages 16 and older are developmentally advanced enough to safely operate a skid loader is "unrealistic", adding that her young children were taught every job on the farm, including operating machinery. 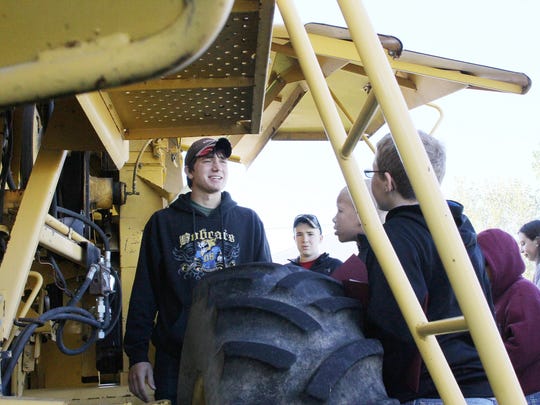 One reader commenting on the tragedy wondered about laws preventing young children from operating heavy machinery.

"I understand that farm kids help with chores and the running of the farm but this should not ever happen," the reader wrote. "They need maturity that doesn't  exist in a 5 year old."

Over 100 years ago, child labor in the U.S. was an accepted practice across all industries, said Mary E. Miller of the National Farm Medicine Center.

"The Fair Labor Standards Act (FLSA) of 1938 took children under 16 out of most workplaces for their own safety and over time has restricted the most hazardous work activities for 16- and 17-year-olds," Miller said.

Agriculture, however, has been and continues to be the lone exception.

The U.S. Department of Labor created new rules regarding the Agricultural Child Labor Hazardous Occupations Orders (Ag H.O.) based on a comprehensive evaluation conducted by the National Institute for Occupational Safety and Health (NIOSH), which reported on its evaluation in 2002 and made recommendations concerning both non-agricultural and agricultural hazardous occupations orders.

As a result of the report, regulations for non-agricultural HOs were revised and became effective in 2010. Unfortunately the updated rules continue to exempt family farms and do not provide protections for 16- and 17-year-olds. Both of these changes would require an act of Congress.

"Just because it’s not illegal to ask a farm kid to drive the skid steer, doesn’t mean it’s ethical," Weichelt said. "As parents, we always need to weigh the benefits with the risks."

Many parents relish the benefits of raising children on the family farm. As farming is an industrial setting, parents must make safety a priority. (Photo: David Olds/The Lansing State Journal;)

One of the biggest worries one reader said is keeping kids safe on their farm.

"Yes, some kids do learn how to run equipment quite early. They learn a lot of things earlier than other kids but parents need to be vigilant about their safety because accidents do happen," the reader said. "I'm sure (the Clark County family) will regret this for the rest of their life. My heart goes out to the boy driving the skid steer."

In an effort to prevent future tragedies, a set of guidelines were designed to assist parents and others in assigning age-appropriate tasks for children ages 7–16 who live or work on farms and ranches across North America.

North American Guidelines for Children’s Agricultural Tasks (NAGCAT) are based on an understanding of childhood growth and development, agricultural practices, principles of childhood injury, and agricultural and occupational safety. Voluntary use of the guidelines can help parents and others make informed decisions about appropriate tasks for youth.

Unfortunately some farm families send children out to do an adult's job. While children may appear to be "big enough" to handle the work and responsibilities, they do not have the ability to avoid the hazardous circumstances, nor think quickly enough to recognize and react to danger, said safety officials.

According to the Cultivate Safety website, more appropriate jobs might include hand-harvesting produce, picking rocks, feeding milk to calves and cleaning the service alley of a barn. 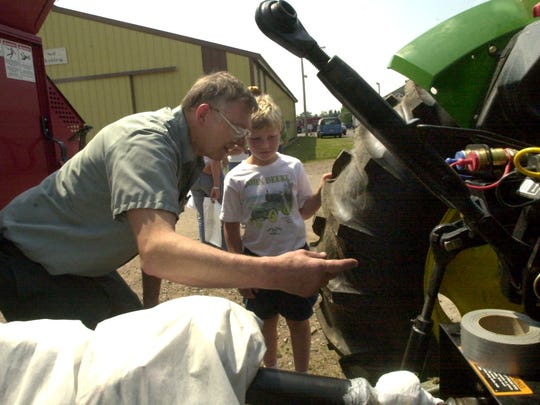 Bill Hanson explains to 9-year-old Brandon, the dangers associated with the operation of a tractor during a farm safety event at the Lincoln County Fairgrounds. (Photo: B. A. Rupert)

“Children develop at a certain rate,” said David Schwebel, child developmental psychologist, University of Alabama at Birmingham. “We might be able to push that development a little with good training and teaching. But the human brain has a certain capacity, and it is hard to speed that capacity beyond what the human brain is built for at a particular age.”

Although a skid loader may seem easy to operate, one reader says there's more to it.

"Age 5 is way too young to drive. Evidentally (the 5 year old) could drive the skid steer but you also have to be able to see over the windshield to see what's in the way!" the reader said.

Weichelt said that rather than engineering out the hazard by making it difficult for youth to operate, some newer equipment may actually make it easier. For example, some skid steers can be operated with just the hand controls, and weight sensors and seatbelts can be, and have been, adjusted for young operators.

The primary reason skid loaders are dangerous is the operator’s limited field of vision. When in the driver’s seat, the field of vision is limited, especially to the sides and rear of the machine, Weichelt said. Even with a back-up camera in place, there are still blind spots.

"A child is difficult to see, since they’re smaller, and a child in the operator seat would have a more limited field of vision than an adult because they are shorter," he said. "Some equipment is deceptively simple to operate, but parents must ask themselves, “can my child react appropriately if something unexpected happens?” If the answer is no, or you’re not sure, then consider assigning a different task."

Only children ages 16 and above are considered to be developmentally advanced enough to safely operate a skid loader.