Knowing what the weather is up can maximize a dairy's efficiency and ability to plan.(Photo: Carole Curtis)

JUNEAU - Weather and forecasts and models get Eric Snodgrass's motor running, but the intersection of weather and the agricultural world holds particular fascination for him.

During "Outlook on Spring", the first of a three-part World Class Webinar on weather being presented by Professional Dairy Producers of Wisconsin, the animated atmospheric scientist dove into ways to use the best and latest weather analysis and forecasting tools to maximize a dairy's efficiency and ability to plan.

Snodgrass is University of Illinois's director of Undergraduate Studies for the Department of Atmospheric Sciences. He co-founded Global Weather & Climate Logistics, which recently merged with Agrible Inc, a precision farm management and predictive analytics company, where he serves as senior atmospheric scientist. 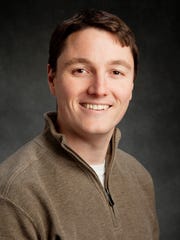 Considering 123 years of weather records, most of the country had a very warm start to spring and late winter, Snodgrass said. The National Phrenology Network's map of Earth shows how early the season has arrived for the eastern two-thirds of the nation, with the spring wave of greening early by a good 20 days or more.

Remarkably, in spite of a weak El Nino, the substantial drought out West has eased, especially in California. "Since October, 2016, California has received over 90 trillion gallons of water, and that has largely eliminated the drought there," Snodgrass said.

"It's officially the wettest year on record in California," he observed.

The Pacific Northwest continues to deal with poor conditions for herd health. Lots of snow and rain with very active freeze/thaw cycles in the valleys have kept it extremely muddy. Pole barns have collapsed under the weight of snow, spring calving conditions were far from ideal, and fieldwork has been very difficult.

In Wisconsin, snowfall levels were below average, while drought was building in Georgia, South Carolina, Alabama and in Florida, where 104 fires were burning.

"You have to get this whole country perspective because the dairy industry spreads across the whole U.S.," Snodgrass noted.

This year's picture for grain is painted against the backdrop of multiple years of great U.S. and global crops, especially in Brazil. Snodgrass is watching 2017 closely, given corn prices and corn acres are down.

In 2015, there was a June rally, tropical storm Bill, and the western corn belt carried the country.

For 2017, corn acres have come down and bean acres have gone up, a switch Snodgrass finds amazing since there were record bean yields last year, record winter and spring yields coming out of South America and, therefore, a lot of soybeans on the global market.

He'll be keeping a close eye on July, since any stress during that month will weaken the corn crop and prices will respond quickly. For soybeans, it's always about August and the rain needed to finish pod filling.

In Wisconsin, rain and cooler weather has curtailed corn planting to 1 percent, compared to the average of 4 percent.

A look at water.weather.gov/precip showed the delay has been caused by untimely rains. "Over the past 14 days, most of the state is somewhere between 150-200 percent of average rainfall," Snodgrass said, with southern Minnesota and parts of Iowa in the same boat.

Besides listening to the professionals, Snodgrass believes it is very important for farmers to know where to go to get the best weather information. To that end, he's built a website with all of his favorite weather links. It is htts://www.atmos.illinois.edu/~snodgrss/Ag_Wx.html.

"I put all of these websites specifically on my University server, so they will forever remain free," he said.

The site is a gold mine of information with radar animations, satellite data and abundant forecast maps detailing precipitation, temperature, severe weather, El Nino activity and much more. "All the stuff you want to know about the weather is there," Snodgrass said. "Check it out."

One "really fun" link is earth.nullschool.net, which shows the flow of the atmosphere across the Earth. On April 26, it showed a massive branch of the Pacific jet stream digging into a deep trough in the center of the country.

One of Snodgrass's favorites is the "Blitzortung" (German for 'lightning') map, which shows lightning strikes which, he pointed out, are a major threat to herd health.

Snodgrass designed the site maps to give a timeline of the weather with 24-hour and 48-hour forecast maps, as well as 6-10 day temperature and precipitation forecasts.

There are also big NOAA maps showing precipitation over the next five days, as well as maps detailing the upcoming 8-14 days, one-month and three-month forecasts.

"That's perfect for a quick snapshot of what's going on, but if you've got more time, I want you to click on 'Tropical Tidbits'," Snodgrass said.

It provides access to all of the models the US government runs, including mesoscale maps, which are small scale, high resolution models. The NAM 3km is of particular interest because it gives forecasts of precipitation type and intensity running out the next 60 hours.

"This animation allows us to see exactly when the precipitation will arrive," Snodgrass said. "Our weather forecasting models are getting to the point that were able to do a very good job of predicting the timing and the intensity of rain."

For a longer time frame, click on "Global GFS" which gives the forecast for the next 16 days, as well as the total accumulated precipitation. "What a great resource for you to have  so anytime, you can zoom in on your own location and see what the precipitation is going to look like," Snodgrass said.

Two of the best performing global analysis models over the last six months have been the GFS2 and the GFDL. "They are not perfect, but I watch them every day and, twice a week, I provide a video link discussion to keep you updated," Snodgrass said.

Models looking into the end of May suggest keeping mud boots handy. "We are picking up a very wet pattern through the heart of the corn belt through the month of May," Snodgrass said.

The European model for the next 30 days also shows a slight cool bias for the western two-thirds of the county (the Ohio River Valley to the west). "What I'm concerned about is when the new crop is in the ground, we're not going to be accumulating growing degree day (GGD) units quickly," he shared.

Snodgrass's forecast for the overall temperature pattern from April through June 1 is for Illinois, Iowa and southern Wisconsin to be near average to warmer than average. "We are picking up on a slight cool bias for northern Minnesota and northern Wisconsin," he added.

For precipitation, the central plains will be wet to start off the season. "This is a good thing because we did have some drought here," Snodgrass pointed out.

Overall, the picture painted by the forecasts looks pretty good for the start of the 2017 growing season. "It also looks like it's not going to stress herd health too much as we get going," Snodgrass concluded.

On May 17, he will present "Correlating Severe Weather and US Grain Markets". For more information or to register, go to www.pdpw.org or call 800-947-7379.