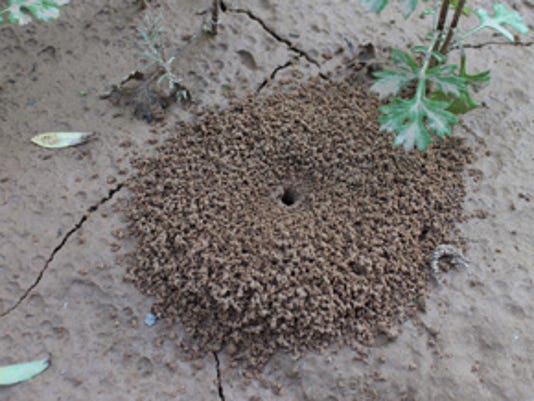 Ant hills can actually serve as a mulch, according to research done in China.(Photo: photo “Courtesy T. Li”)

Madison - Ants can be annoying little insects. In your home, they make army-like lines to any crumbs on your floor. In your home’s frame, carpenter ants can do a job of eating away your walls. But what about outside? Do ants play a positive role in your yard? Your garden? What about in a farm field?

Research undertaken by scientists in China reveals that ants are hardworking and beneficial insects. In the activities of their daily lives, ants help increase air, water flow, and organic matter in soil. The work done by ants even forms a type of mulch that helps hold water in the soil.

Ants are busy insects. They dwell in the soil, and build their homes by burrowing tiny holes, channels, and chambers. Soil scientists refer to these as macropores. Where do ants place the soil they are digging out? On the soil surface. The tiny clumps we see as an ant hill are what researchers call aggregate mulches.

In addition to creating the aggregate mulches, ants help the soil environment by “bringing down food sources from outside,” says soil scientist Tongchuan Li. “Types of food include the bodies of insects, leaves, sugar water, and the ‘honeydew’ of aphids. The big diameter of the nest channels (4.1-6.6mm) and the chambers also can improve the transport of air with frequent ant activities.”

Li and researchers at Northwest A&F University, Yangling, China, found that ant-made aggregate mulches could help retain water in agricultural fields. In other words, these aggregates can act like any other mulch, preserving moisture in the soil, under certain conditions. “Minimal attention has been paid to the effects of ant activities on soil [water] evaporation thus far,” says Li. “Ants represent half of the global insect biomass,” and these mulches could be playing an important role in soil moisture, soil health, and agricultural field efficiency.

According to Li’s paper, gravel has been used in China as an effective mulch to conserve water. However, in the Northern Loess Plateau region, no widespread distribution of gravel occurred.  The burrowing ants were leaving stacks of soil aggregates each time they burrowed into the soil. A conservation project undertaken in 1999, Grain for Green, promoted the development of soil-dwelling animals. China planted 400-600 million trees to control severe soil erosion problems. These trees, in turn, “provided abundant food and suitable habitats” for neighboring fields, says Li.

Another reason why the ant population was lower before 1999 than now was human-made. “Before the Grain for Green Project, cropland was the main land use,” says Li. “Plowing can severely damage ant nests. [The project called for the] abandonment of agricultural land in these areas. The result was less disturbance and a substantial increase in vegetation cover, which promoted the development of ant colonies.”

The type of ant studied by Li and his team was one found prevalent in agricultural fields of China, Camponotus japonicus. While not the largest ant in China, “Camponotus japonicus is the largest ant in the northern Loess Plateau,” according to Li. “The body length of worker ants varied from 7.4 to 13.8mm. They live in grasslands of alfalfa, abandoned cropland, forest land, and apple orchards. This kind of ant is widespread in China.”

One downside to ant-made aggregate mulches is that they disintegrate with rainfall. However, ants tend to enlarge their nests by making new chambers after a rainfall, producing more aggregate mulches after rains. So, in theory, aggregates are a "renewable" mulch source.

Li’s research was published in Soil Science Society of America Journal. This research was supported by the National Natural Science Foundation of China and the State Key Laboratory of Soil Erosion and Dryland Farming on the Loess Plateau