LUXEMBURG - A proposal to deal with Kewaunee County's groundwater issues is raising more questions than it answers, according to some of the people who attended an informational meeting about it Monday.

About 140 people gathered Monday at the Kewaunee County Fair Expo Center to hear details about Gov. Scott Walker's plan to spend $20 million for a project or projects that would generate energy from manure while reducing farm runoff. State officials who presented details of a request for proposals from companies to build and operate the manure-to-energy facilities, known as anaerobic digesters, said they were not able to answer many residents' questions because it's still too early in process.

"I haven't really heard any answers to questions citizens are having about how this is going to help groundwater, how this will protect our public health and make it better for citizens and property values here in Kewaunee County or wherever it's located," said Lynn Utesch, a farmer and recently unsuccessful candidate for Assembly.

"What their presentation did was raise more questions than it answered."

Representatives from the Public Service Commission, the Department of Natural Resources and the Department of Agriculture, Trade and Consumer Protection held the meeting at the invitation of the Kewaunee County Board.

"This is a request for proposals, meaning we don't have all the answers right now," said Russ Rasmussen of the DNR. "We're waiting to see what proposals come in, what components are in there. That's what is going to drive how we design the project itself. We're looking for people to come up with innovative answers to help us solve a problem, the problem being to have agriculture continue as a viable industry while addressing the groundwater issues that exist in this part of the state."

Digesters could be built anywhere in the state but are likeliest to end up in the Lake Michigan basin area, especially in the areas with porous karst geology, where manure runoff most affects groundwater. That makes Kewaunee County a high-ranking candidate on the list of possible locations. 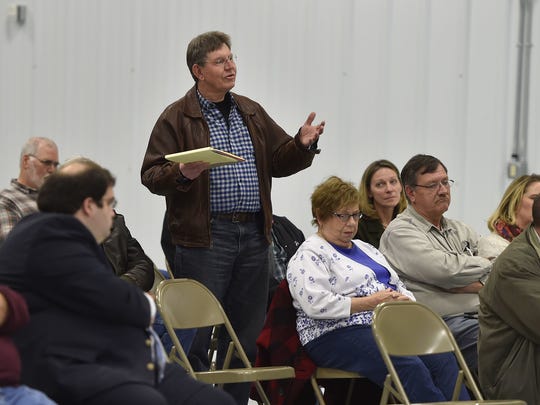 Eric Corroy of Red River asks about the economic sustainability of a proposed anaerobic digester system during a meeting Monday in the expo building at the Kewaunee County Fairgrounds in Luxemburg. (Photo: Tina M. Gohr/USA TODAY NETWORK-W)

"What role will county government have?" asked Kewaunee County Supervisor Lee Luft. "When do we get input on what you decide?"

Once the state panel grants the award, the developer still would need to meet all of the usual local permitting processes, Luft was told.

"I'd like to see our involvement come sooner, to make sure we have some control on how it impacts our quality of life," Luft said, generating applause from the rest of the audience.

Neighboring counties also should be given an early say in the approval process, Door County Supervisor Megan Lundal added, also to applause from the audience.

"What we've seen in looking at what's happened in other parts of the country, is that these projects have come in, they've been horrible in terms of their impact on the community," Luft said after the meeting. "High odor, headaches, nausea, all kinds of community problems, people not enjoying their out-of-doors because of these horrific odors.

"The community then had no say, and now the projects were being shut down. There was no bonding or funds set aside to bring closure to those plants, so the community has this plant in their midst that they can't deal with and that caused them a great deal of heartache."

Luft said he was glad the panel agreed to meet and give Kewaunee County residents their first glimpse of the proposal.

Some at the meeting also expressed concern with the speed at which the proposal seems to be moving. The PSC set a "soft deadline" for proposals of May 1, and the selection would be made by the middle of June.

For information about the request for proposals, go to www.psc.wi.gov/biogas/rfp.htm.