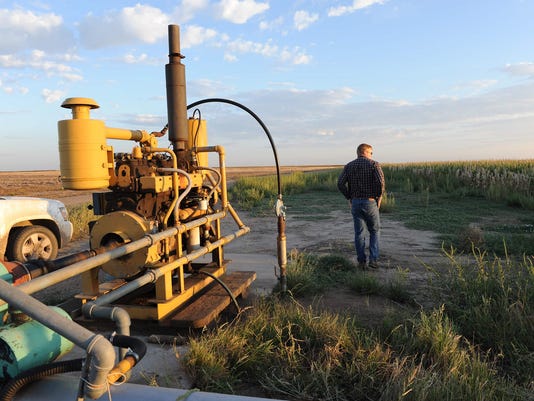 Jay Garetson looks into a cornfield next to a pump on his family's farm in southwestern Kansas. A judge Tuesday, Jan. 31, 2017, ruled in favor of Garetson's lawsuit by concluding his family's senior water right had been "impaired" by their neighbor — a company that holds a junior water right.(Photo: Ian James, The (Palm Springs, Calif.) Desert Sun)

PALM SPRINGS, CA - A judge has ruled in a long-running legal fight over water in Kansas, siding with a farmer who argued his neighbor’s pumping was illegally pulling down the level of the water table.

By permanently barring the use of two wells in an area where farmers rely on the Ogallala Aquifer to grow corn, the judge concluded the Garetson family’s senior water right had been “impaired” by their neighbor — a company that holds a junior water right.

“What made this case so important is the precedent that is now set,” said Jay Garetson, who filed the lawsuit in 2012 together with his brother Jarvis. The Garetsons have said they sued not only to defend their livelihood but also to press the state to enforce its water laws, and to call attention to the urgent need for action to preserve the aquifer.

“Our goal was to force this to the forefront,” Garetson said in an interview Wednesday. “The best-case scenario would be it forces people to recognize that the status quo is no longer an option.”

The High Plains Aquifer, also known as the Ogallala, lies beneath eight states from South Dakota to Texas and is the lifeblood of one of the world’s most productive farming economies. The aquifer makes possible about one-fifth of the country’s output of corn, wheat and cattle. But its levels have been rapidly declining as farms pump out much more water than is naturally replenished.

In parts of southwestern Kansas, many wells have gone dry and some farmers have called for collective steps to slow the rate of decline and extend the life of the aquifer.

Kansas' “first-in-time, first-in-right” water rights system gives priority to those who have been using their wells the longest. And farmers are actually using much less water than they would be permitted under the system of appropriated groundwater rights established decades ago.

The largest aquifer in North America is nearing depletion in many areas, putting profound stress on farmers and communities.

But with aquifers' levels dropping and a limited supply left that can be economically extracted for farming, the Garetsons and others argue that the state and water districts should step in to establish limits on pumping.

Representatives of the company American Warrior, which owns the adjacent farmland and the two wells affected by the ruling, did not return calls seeking comment.

Mike O’Brate, vice president of the family-owned company, has said previously that if the Garetsons won it would set a bad precedent and more lawsuits would follow.

“It is not equitable to allow defendants with a junior water right to successfully grow their crop, while plaintiff ... is left with insufficient water,” she wrote in the decision.

The judge emphasized the seriousness of the groundwater depletion problem.

“The aquifer is dropping and recharge is slow. Every year the aquifer in this area drops an average of six feet,” Gilmore said. She also pointed out that natural recharge of the aquifer in the area is estimated to be 1 inch per year or less.

The court previously had temporarily ordered American Warrior to halt pumping from the two wells. In this week’s order, the judge granted an injunction permanently ordering the wells shut down to protect the Garetsons’ water supply.

Garetson said the decision should help bring order to a chaotic situation, and he hopes the case will be a catalyst for management of groundwater. He said he thinks the local groundwater district should establish a water budget and institute a sort of “cap-and-trade” system, in which water use would be scaled back based on established rights and could be sold between farmers, thereby allowing the market to sort out the scarcity problem.

He thinks such a system could serve as a model across the Ogallala Aquifer and in other areas of the country where aquifers are declining because of excessive pumping.

Garetson has seen some wells go dry on his farm, where he and his brother grow corn and sorghum. And he acknowledges his own pumping contributes to what is effectively the “mining” of groundwater.

He wants state officials and the region’s water managers to establish limits to move “in the direction of sustainability” — even though that’s a high bar to reach given the area’s limited water supplies and slow rate of aquifer recharge.

Garetson said he hopes the court decision will help Kansas farmers move away from the pattern of unchecked pumping that is draining the aquifer. Under the status quo, he said, “we’re actually just borrowing from the future. We’re burning up our savings account.”