An outbreak of bird flu in more than a dozen countries is putting the chicken industry on high alert.

Market chickens wait in their cages at the Hartford Fair. Chickens and other poultry were banned from the fair last because of avian flu.(Photo: Jessica Phelps/The Advocate)

Humans aren't the only ones who can get sick during flu season. An outbreak of bird flu in more than a dozen countries is putting Delmarva's chicken industry on high alert for the second time in two years. There's no evidence that the two strains detected in overseas flocks can be transmitted to people, whether on the farm or through eating the meat of birds exposed to the virus, experts say. But they could threaten the health of the peninsula's main agricultural staple. The biggest of this year's strains is similar to the one that forced farmers in 2015 to kill nearly 50 million birds, primarily in the Midwest, to stem the spread of the disease to other flocks. Although bird flu hasn't been found in the United States yet, now is the time for farmers to start preparing, said Dr. Michael Radebaugh, Maryland's state veterinarian.

"It's a winter-time disease," he said. "When the birds are coming down — I can hear them coming over my house now — this cold winter is really driving them down on to the Delmarva Peninsula."

The fight against bird flu demands great attention to detail from everyone involved in the production chain, said Dan Shortridge, spokesman for the Delaware Department of Agriculture.

A minor slip-up like forgetting to properly wash a truck's tires when traveling from one farm to another can trigger an outbreak or magnify an outgoing one.

"We're talking about a lot of people and agencies, and there's very little room for error," Shortridge said.

Outbreaks in Western Europe, Russia, Israel, India and Korea have been traced to a highly contagious H5N8 strain, which is similar to 2015's H5N2 strain. A new strain, called H5N6, has been found in flocks in Japan.

"It's unusual we have so many cases around the world," Radebaugh said. "That says it's still out there. It's still a threat." 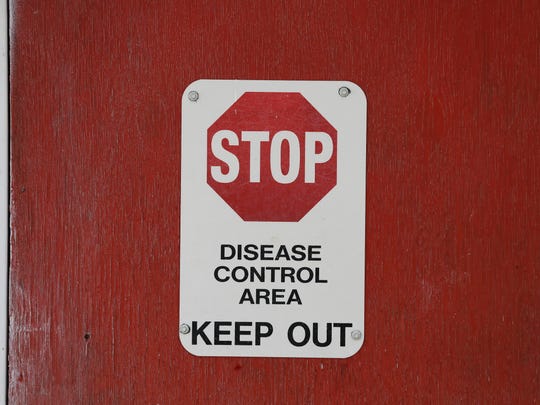 Agricultural officials say 39,000 turkeys at a southwest Missouri farm have been destroyed after avian flu was detected. (Photo: Charlie Neibergall/AP)

Delmarva is no stranger to bird flu.

In 2004, a different strain of the disease was found at two Delaware farms and one near Pocomoke City.

To control that outbreak, 205,000 chickens were killed and composted inside their chicken houses as officials imposed quarantine zones for miles around the affected farms.

That strain, however, was less contagious than the 2015 and current outbreaks.

State agricultural officials have kept up bird-flu warnings to Delmarva poultry keepers since the U.S. cases first emerged last year. It can be a challenge for farmers to maintain their vigilance over such a long time, but it's necessary, Radebaugh said.

"The broilers are pretty well housed inside, but the infection can get in by carelessly tracking it in from outside," he said.

"It can be tracked in by humans or equipment, or even some small birds could have it on their wings or feet and bring it into the barns."

Steps farmers can take, according to the Maryland Department of Agriculture, to reduce the contamination include:

Posting "Restricted Access" signs outside chickenhouses and securing the area with a gate, or doing both.

Covering feed to prevent wild birds, rodents or other animals from accessing it.

Properly containing poultry carcasses, used litter or other disease-containing organic materials to prevent wild birds, rodents or other animals from accessing them.