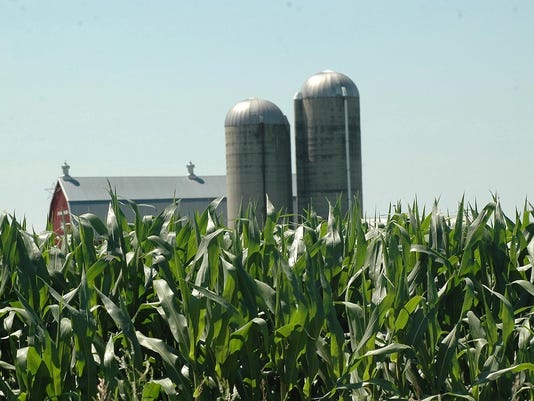 A proposed ordinance would allow the county department to verify that a proposed facility would comply with state of Wisconsin rules and provide facility owners or operators with a predictable process and timetable for gaining approval for the facility.(Photo: Carole Curtis)

Chilton — Following a public information meeting and hearing, members of the Calumet County land and water conservation committee and county conservationist Tony Reali are reviewing some details of a proposed county ordinance to create a local process for the siting and expansion of livestock facilities.

The proposed ordinance would allow the county department to verify that a proposed facility would comply with state of Wisconsin rules and provide facility owners or operators with a predictable process and timetable for gaining approval for the facility.
A license would then be issued for a new or expanded livestock facility and livestock waste storage unit. An existing license would be transferable to a new owner or operator.

Reali indicates that the ordinance is modeled in large part on a similar one in neighboring Manitowoc County, where it was approved in 2007. Since then, dozens of licenses have been issued under such ordinances in several Wisconsin counties, also including Fond du Lac, Trempealeau, Shawano, Dodge, Jefferson, and Marathon.

The ordinance also introduces standards regarding property line and roadway setbacks, odor and nutrient management, manure storage facilities, management of runoff at the site, and overall management and training plans for operating the facility. There are requirements to have a nutrient management plan (manure disposal) accompanied with agreements for sufficient land acres on which to apply the manure in the following three years.

In the proposed ordinance, the term “aggrieved person” would apply to anyone who lives or owns land within 2 miles of a livestock facility subject to the ordinance. They would have standing to appeal a decision.
To the question of whether adjacent landowners could halt a project, Reali observes that meeting the state's standards on siting would prevent such instances. Once issued, siting permits are permanent and transferable, the proposed ordinance indicates.

Requirements in the ordinance are acquiring the services of a qualified nutrient management planner and of a professional registered engineer or certified agricultural engineering practitioner to evaluate the manure storage facilities and runoff management.

The proposed ordinance would allow local units of government to charge a fee of up to $1,000 for their costs to review and process an application. The ordinance also mentions the possibility of a $500 fee for a major revision at the facility.

Licensed facilities would be subject to an inspection schedule. For refusal to allow an inspection, the license would be revoked.

The information meeting here drew a crowd of more than 50 attendees – 24 of whom shared remarks. A great majority of the attendees were farmers, agribusiness professionals, or town board chairmen.

Reali explained that the impetus for the proposed ordinance came from recent projects (two of them large dairy goat operations within the past year) undertaken in the county. He said a few residents questioned the projects, prompting county officials to check if they had adequate procedures in place on a process to regulate livestock facility siting decisions which are also subject to provisions in Wisconsin's ATCP 51.

Some meeting attendees were concerned that proposed setbacks – depending on animal numbers – of 100 or 150 feet from roadways, 100 or 200 feet from property lines, and 350 feet from a roadway or property line for a new manure storage unit would inhibit the creation of any new facilities with more than 500 animal units.

Other concerns were raised about the costs for hiring professional services and for odor control along with the imposing of another layer of regulations for such projects. On the other side of the ledger, mentions were made about the already existing frequency of groundwater pollution in Calumet County from nitrates and bacteria which could be traced in part to livestock manure.

In defense of the ordinance proposal, Reali says the intent is to assure an upfront process rather than an “after the fact” process – following the arrival of animals – that has occurred at times in the past.

The county's committee will check with other counties to evaluate the concerns expressed about setbacks, which could limit or restrict expansions at some existing sites, Reali promises. Regarding the requirements on odor compliance, he notes that a state-created spreadsheet is available for making calculations.

Among other concerns, Reali acknowledges that CAFOs (concentrated animal feeding operations with at least 1,000 animal units) already need to get approval from the Department of Natural Resources, resulting in another element of compliance if they are subject to a county ordinance.

For the most part, Reali indicates that professional services are available for fulfilling the requirements in the proposed ordinance and that ATCP 51 worksheets serve as guidance on specifics regarding compliance.