Stevens Point — The U.S. Fish and Wildlife Service has selected the University of Wisconsin-Stevens Point as the site for its 2017 Federal Duck Stamp Art Competition.  It is the first time this revered event will be held in Wisconsin. 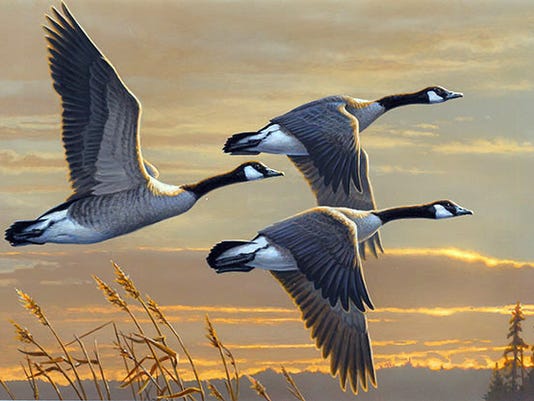 Stevens Point — The U.S. Fish and Wildlife Service has selected the University of Wisconsin-Stevens Point as the site for its 2017 Federal Duck Stamp Art Competition.  It is the first time this revered event will be held in Wisconsin.

The contest will be held Sept. 15-16, 2017. It typically attracts art from nationally recognized wildlife artists throughout the country.

Formally known as the Migratory Bird Hunting and Conservation Stamp, the Federal Duck Stamp is a required purchase for waterfowl hunters age 16 and older. As the longest-running, single-themed U.S. postal stamp, it is valued as a collector’s item.  Many birders and other outdoors enthusiasts also buy the stamps as a way to support wildlife conservation. Proceeds from the sale of duck stamps are used to buy or lease wetlands and associated upland habitats for inclusion in the National Wildlife Refuge System.

"We are honored to have this important and historic event on our campus," said Christine Thomas, dean of the College of Natural Resources at UW-Stevens Point.

Thomas worked with national agencies for several years to bring the duck stamp competition to UW-Stevens Point. It’s a fitting venue for the home of the nation’s first conservation education program and one of the largest, best known natural resources colleges in the world.

The Federal Duck Stamp Art Contest is the only legislatively mandated federal art competition in the nation. Thousands of wildlife artists have entered since the first open competition in 1949. A panel of art, waterfowl and philatelic authorities judges the art and selects the work for the next stamp. Judging will take place over a two-day period and is free and open to the public.

Outstanding wildlife art will be available for public viewing during the event. The winning art work will be featured on the federal duck stamp on sale from July 1, 2018, to June 30, 2019.
Various activities are being planned in Stevens Point before and during the contest, including:

“We’re excited to host the duck stamp contest and pleased with the amount of interest and creative ideas being pursued by the arts community, conservation groups and Stevens Point leaders,” said Rhonda Sprague, interim dean of the College of Fine Arts and Communication, which is also a host.

The contest moves around the country to generate interest in wetlands and waterfowl, and to allow more people to see the exceptional wildlife artwork. Among places it has been held are Minnesota, Ohio, West Virginia, Utah, California, Tennessee, Florida and, most recently, in Pennsylvania.

"As a long-time Fish and Wildlife Service employee in the Midwest Region and as an alumnus of UW-Stevens Point, it's an honor to host the Federal Duck Stamp Contest in the Midwest once again," said Deputy Regional Director Charlie Wooley. "I also thank College of Natural Resources Dean Christine Thomas for her vision, determination and efforts to help bring the contest to Stevens Point."

The U.S. Fish and Wildlife Service has a rich history of waterfowl conservation. The Federal Duck Stamp, one of the world’s most successful conservation programs, is a testament to that success. Millions of dollars are raised annually for wetland conservation when hunters, bird watchers, other outdoor recreationists and art and stamp collectors buy Federal Duck Stamps.

In Wisconsin, the Horicon and Necedah national wildlife refuges, as well as numerous waterfowl production areas, have benefited from duck stamp revenues.

These lands are open to birders and hikers throughout the year and to hunters in the fall. In spring, they serve as important nesting areas for waterfowl, pheasants and non-game birds, such as songbirds and cranes.

For more information about the Duck Stamp Program, to buy stamps, or to view images of previous winners, visit: http://www.fws.gov/birds/get-involved/duck-stamp.php

The mission of the U.S. Fish and Wildlife Service is working with others to conserve, protect and enhance fish, wildlife, plants and their habitats for the continuing benefit of the American people. We are both a leader and trusted partner in fish and wildlife conservation, known for our scientific excellence, stewardship of lands and natural resources, dedicated professionals and commitment to public service. For more information on our work and the people who make it happen, visit http://www.fws/gov.