Caterpillar's third-quarter profit was essentially cut in half with the global economy stuck in a funk(Photo: Supplied)

PEORIA, IL (AP) - Caterpillar's third-quarter profit was essentially cut in half with the global economy stuck in a funk, and the company said that it expects that malaise to extend into next year.

The construction and mining equipment maker lowered its outlook for the year and shares of Caterpillar slipped nearly 2 percent before the market opened.

Falling commodity prices on the farm, in the mines, and in the oil patch have forced a deep reduction in equipment spending.

The earnings report Tuesday was the first since Caterpillar announced that longtime CEO Doug Oberhelman was stepping down.

Oberhelman said in a company release that there is an abundance of used construction equipment in North America, as well as idle locomotives. Around the world, mining trucks are sitting around being unused, he said.

"Economic weakness throughout much of the world persists,'' he said.

Caterpillar announced last week that Oberhelman will step down at the end of the year and be replaced by Jim Umpleby, an executive who has worked at the company for more than 30 years. Oberhelman will remain chairman through March and then retire.

Caterpillar now expects annual per-share earnings of $3.25 and revenue of $39 billion, down from its previous forecast of $3.55 per share and revenue between $40 billion and $40.5 billion. Its outlook is below the $3.53 per share earnings and $40.1 billion in revenue that Wall Street analysts expected, according to FactSet.

Looking ahead to next year, the company expects revenue to be essentially flat. If oil prices remain stable or rise, the company said it may see a more ``positive'' second half of the year. 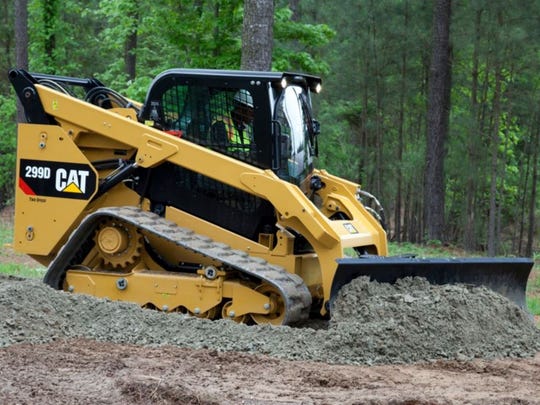 Caterpillar's third-quarter profit was essentially cut in half with the global economy stuck in a funk, and the company said that it expects that malaise to extend into next year. (Photo: Caterpillar)

"We remain cautious as we look ahead to 2017,'' said Oberhelman.

Revenue for the company, based in Peoria, Illinois, fell 16 percent to $9.16 billion, short of the $9.8 billion that Wall Street had expected.