Cider-makers revel in old-fashioned production of their beloved drink

Central WI Vintners and Brewers Assoc. gathered to make cider with a method that has been used for more than a century.

Cider-makers revel in old-fashioned production of their beloved drink

Joseph Woolley tosses a bucket of apples into a century-old grinder Sunday. He and members of the Central Wisconsin Vintners and Brewers Association gathered to crush and press apples into cider.(Photo: Nate Beck / USA TODAY NETWORK-Wi)

Yards away, you can smell chicken roasting over a spit and hear the off-beat clanging of machines pulverizing thousands of apples into cider, at the home of Tony Deich along winding Highway 151.

Members of the Central Wisconsin Vintners and Brewers Association gathered at Deich's home to make cider with a method that has been used for more than a century. The group started small, producing about 40 gallons of juice in its first attempt at cider-making four years ago. This year and last, however, an assembly line dozens deep cranked out some 400 gallons of the stuff.

Some will be fermented into hard cider, some sipped fresh-squeezed. Cider keeps well frozen, and it can be scuttled away until some dreary time during winter's peak, when a thawed glass brings you back to this crisp and sunny Sunday afternoon.

"Everyone thinks everything comes from the store," said Steve Mikolajczak, a member of the vintners and brewers association. "If you've never had real cider, made with apples, there's nothing like it."

The yearly gathering is something of an ode to old machines. Deich roasts chicken on a spit powered by a slow-turning motor, in the belly of a grill fashioned from an old motor oil drum. His grandfather built the grill years ago, and with a few tweaks, it runs like a champ.

There are apple presses here that date back to 1910 and the 1980s. The workhorse, which both chops and presses fresh apples, was built in the 1890s and serves as the focal point for the operation.

The group, in an assembly line, washes apples in four separate tubs, then feeds them into the jaws of the old machine, slicing apples into a juicy pulp. Workers wrap a hunk of pulp in netting and turn a press to wring cider into stainless steel bowls. One member brings cookies shaped like severed fingers — a tounge-in-cheek jest at the contraption's chopping prowess.

The rig belongs to Deich's neighbor, Richard Koepke, and has been in the family for three generations. Operating the heavy hand crank that chops the apples is no easy task: it takes just about every kind of lift you can muster to keep the crank turning.

"We could turn the crank for about two minutes and then you were toast," Mikolajczak said. This year and last though, the group fashioned a motor that turns the blades of the apple crusher.

It has been a process of trial and error, re-learning how to make cider like people did more than a century ago. Last year, a wooden block that presses chopped apples into juice snapped partway through production. Like most other components on this machine, that block dates back to the turn of the 20th century. With help from a neighbor, the group fashioned a replacement from leftover lumber. Two hours later, the press was churning out cider again. 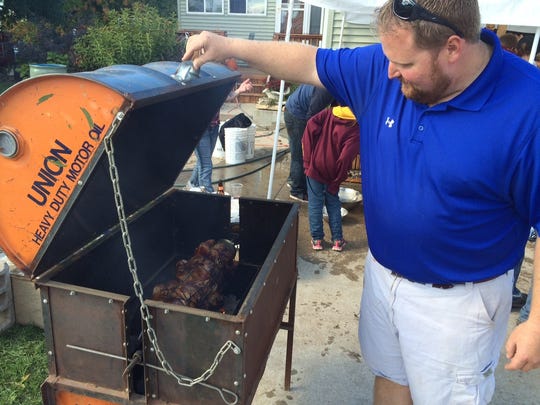 This year, Dave Roth and his son Andrew added a thoroughly modern machine to the group's fleet of apple presses. The Roth family built a hydraulic press ahead of Sunday's event to wrench juice out of this apple mash. Both plan to use part of their share to make a hard cider. Dave Roth will ferment his into an English-style hard cider. Andrew Roth, a brewer at Pearl Street Brewery in La Crosse, plans something a bit more elaborate.

Either way, a bouquet of apples goes into each batch of cider. A good, crisp cider can use five or six varieties of tart and sweet medium-sized apples.

"The thing about cider making is, if your apples are good to eat plain, it's going to make some pretty mediocre cider," Dave Roth said. "You want apples that will give us a mixture of sugar for fermentation and you want a lot of acid."

Same goes for fermenting hard cider. You need tart apples, with a range of flavors. Without that? "It's going to make some pretty boring apple-y tasting alcohol," Andrew Roth said.

Cullen Dunn, also, hauled his own apple press out here Sunday. For his batch, he'll keep the cider as-is: non-alcoholic. This press was built sometime in the 1980s, and he remembers helping his grandparents harvest cider on their farm near Brandon years ago.

"It's fun to get together and crush a whole crap load of apples," Dunn said. "It is the season for a nice sweet cider."