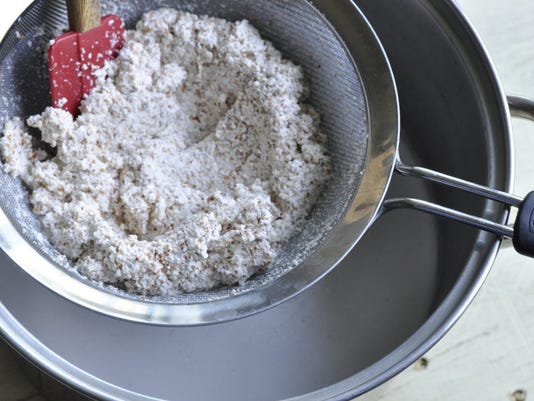 You can tell by the trash talk.

"You can't get milk from an almond," said Chris Galen, a spokesman for the National Milk Producers Federation. "You have to add a lot of other ingredients to make it look like milk."

Galen's correct, of course, as anyone who's ever attempted to milk an almond can attest. Almond milk usually contains only 2% almonds, with a lot of water, vitamins and gelling agents mixed in. But the numbers don't lie. U.S. sales of almond milk rose 4.2% last year to within sniffing distance of $1 billion, according to IRI data. At the same time, while Americans are drinking more organic and full-fat cow's milk, low-fat varieties are plunging, with skim milk consumption down 13% from a year ago, according to the U.S. Department of Agriculture's June data.

But the real blow to dairy is the widespread replacement of cows for almond groves.

California is tops in the United States for both dairy production (about one-third more than No. 2 Wisconsin) and almonds (80% of global output). Land in the state devoted toalmond groves has been steadily rising — 350,000 acres added over the last decade, enough to double the crop to more than 2 billion pounds, according to Rabobank International — while the state lost about 10,000 milk cows this year through July, a 0.6% drop from 2015.

Among the culprits: California's new higher minimum wage, which is crimping profit margins at labor-intensive dairies more than the groves, and mandatory water restrictions in the fertile Central Valley amid a years-long drought. That's pushed almond cultivation to places it's been rare before. Such as dairy farms.

“You can't get milk from an almond, you have to add a lot of other ingredients to make it look like milk."”

Richard Wagner, whose father started the family dairy in Escalon, Calif., already has almond trees, but is putting in about 300 acres more this year. He's taking land away from growing alfalfa and corn for feeding cows.

"Back in the 1950s, there were no almond trees in our area," he said. "Now there are almond trees everywhere. The economics for the trees has been very good. Dairymen have a decision."

Chances are, pressure for weaker California dairies to sell out to nut producers will continue over the next five years, and those who don't sell will be installing groves, said Vernon Crowder, a Fresno, Calif.-based senior vice president at Rabobank International.

Demand for nuts has gone insane. Asian countries import almonds in the shell. In the U.S., half the almonds sold are shaved into everything from ice cream to salads and tucked into energy bars. The other half of the market consists of whole-nut snacks. And snacking on nuts is increasing, according to Chicago-based research firm Technomic.

Almond milk is boosting the nut's popularity, too. Last year, Americans bought $890 million of the stuff, three times the amount of soy milk's $286 million, according to IRI. By contrast, consumers bought $9.2 billion of low-fat and skim milk. Retailers have caught on to the trend. Starbucks Corp. is adding almond milk to its lineup of non-milk alternatives, which already includes coconut and soy milk. And as of last month, Dunkin' Donuts offers it in all its stores.

Among the biggest almond-milk sellers are WhiteWave and Blue Diamond, along with retailers like Target Corp. and Aldi Inc. that have private-label brands. Niche companies are also riding the wave, like NuMoo Nut-Milks, which makes an organic, cold-milled chocolate almond milk.

The National Milk Producers Federation has been trying to get federal regulators to enforce laws on the books that say the word "milk" is reserved for lactation from a mammal. But they're losing that battle, too, as almond milk gets turned into other imitation dairy products, like cheese and yogurt.

The cow-milk industry has turned to Olympic heroes to lead the battle against plant-based drinks.

They're up against Silk-brand drinks that use Venus Williams and DJ Khaled as their #DoPlants spokespeople.

"The almond has become ubiquitous," said Richard Waycott, chief executive officer of the Modesto-based Almond Board of California, which represents 6,800 growers. "The demand for almonds has risen virtually in every market we serve."