They still serve chicken nuggets, but Des Moines Schools is working hard to make its lunches more ethnically diverse — adding meals like enchiladas with beef and pinto beans and Asian-inspired chicken with sweet and sour sauce over rice to the menu.

It's a nod to an increasingly diverse district. More than 6,500 Des Moines students speak limited English, roughly 20 percent of the student body, according to the state education department. The district's students come from families that speak more than 100 different languages and dialects — and have a range of culinary traditions.

The Des Moines Register reports that students say they appreciate the more diverse food at school.

"The enchiladas are better; they have more flavor than chicken nuggets," said eighth-grader Rocio Cruz, who's of Mexican descent.

Rocio also is a fan of the "flavor bar," a new feature where students may add low- or no-salt spices such as garlic or sriracha seasoning. Some cafeterias have it set up like a salad bar, with traditional ketchup next to jalapenos and hot sauce.

You can put on as much as you want," she said with a grin.

In Miami, for example, schools serve Cuban style pork, which is marinated and roasted, as well as arroz con pollo, a chicken and rice dish traditional to Latin America.

"It's hospitality," said Holly Meagher, who coordinates Meredith Middle Schools' International Baccalaureate program that focuses on education from a global perspective. "We want to make sure students feel comfortable and feel valued. And the food we serve has a lot to do with that."

Des Moines introduced Asian and Latino dishes over the last two or so years, which have proven popular among students.

Helping the shift is the fact that more students are willing to try different food. Des Moines Executive Chef Chad Taylor attributes it the prevalence of cooking shows and celebrity chefs.

"I think our kids' tastes have changed," Meagher said. "Kids like more than just pizza and hamburgers anymore."

At area high schools, for example, some dishes now have more spice, such as General Tso chicken and Santa Fe pork flatbread.

But it's a balancing act, as some students still expect traditional Iowa meals with meat and potatoes.

"We really want to try to accommodate students," Taylor said, adding: "We are still serving the Midwestern palate."

Des Moines is continuing to try new dishes, such as a curry with sweet potatoes and chickpeas at Hoover High School, which serves many students of Middle Eastern descent.

It's not yet ready to roll out: Students are split on whether it's too spicy. Others want a meat-based dish, instead of the vegetarian version that was tested.

"We won't give up on it," Taylor said, explaining it can take time to refine, and for students to adjust. 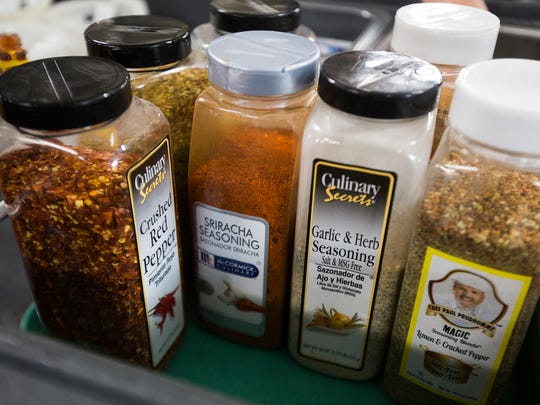 A "flavor station" provides students with the option of adding spices or seasonings to their meals. Des Moines schools are cooking lunches with immigrants in mind by incorporating different 'flavor profiles' for various ethnic backgrounds. (Photo: Rachel Mummey/Des Moines Register)

Last school year, for example, some Burmese students at Meredith Middle School began leaving campus to go home for lunch — and not returning for afternoon class.

Many had just arrived in the United States and were uncomfortable with the hot lunches, still unaccustomed to American staples such as pizza and macaroni and cheese, Taylor said. He was tasked with a special project: Make the fare more welcoming.

The menu now includes a Thai-inspired fish dish with brown rice, catfish fillet and a sauce made of SunButter, which is similar to a traditional peanut sauce. Because of allergy concerns about peanuts, the school substituted sunflower seeds.

"Food is comforting to us, it's a security thing," Taylor said.

As Burmese families shared favorite recipes, Taylor and his staff had to modify dishes to make sure they met federal nutrition and purchasing requirements.

For example, Meredith students requested a traditional noodle soup with eggs. But it was ultimately served as a side of noodles, without the soup or eggs. The thought was, it's better to have something familiar on the menu, even if is not an exact match.

Another request, for fruits such as mangoes, has not been filled because it's difficult to purchase them in a way that meets federal regulations, said Amanda Miller, a district food specialist.

That can be confusing and frustrating for immigrant families, who may not understand why dishes are being altered, said Carolyn Colvin, a professor at the University of Iowa who's worked with immigrant families.

Other countries don't have the same limitations on their school menus, she said.

To help, Colvin said schools might invite parents to demonstrate how they prepare traditional meals during an open house, using that time to have conversations about what can and can't be incorporated at school.

"It's amazing how it can be a unifying conversation," she said. "We all like food, and we like to talk about the food we like and why we make it the way we do."

Des Moines Public Schools now uses Nutrislice, a software that allows students, families and staff to rate and provide feedback on school meals. You can view school-specific menus, see nutrition, pictures and descriptions, and rate food on a 5-star scale.