CAMBRIDGE, Mass. -- When farmers spray their fields with pesticides or other treatments, only 2 percent of the spray sticks to the plants. 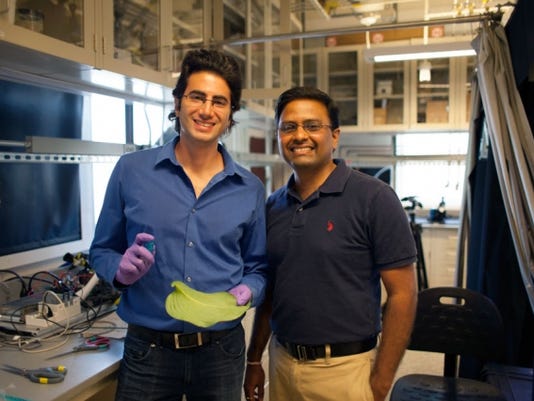 A team of researchers, including graduate student Maher Damak (left) and associate professor of mechanical engineering Kripa K. Varanasi, have found a way to drastically cut down on the amount of pesticide liquid that bounces off plants.(Photo: Photo: Melanie Gonick)

When farmers spray their fields with pesticides or other treatments, only 2 percent of the spray sticks to the plants. A significant portion of it typically bounces right off the plants,  lands on the ground, and becomes part of the runoff that flows to streams and rivers — often causing serious pollution. But a team of MIT researchers aims to fix that.

By using a clever combination of two inexpensive additives to the spray, the researchers found they can drastically cut down on the amount of liquid that bounces off. The findings appear in the journal Nature Communications, in a paper by associate professor of mechanical engineering Kripa Varanasi, graduate student Maher Damak, research scientist Seyed Reza Mahmoudi, and former postdoc Md Nasim Hyder.

Previous attempts to reduce this droplet bounce rate have relied on additives such as surfactants, soaplike chemicals that reduce the surface tension of the droplets and cause them to spread more. But tests have shown that this provides only a small improvement; the speedy droplets bounce off while the surface tension is still changing, and the surfactants cause the spray to form smaller droplets that are more easily blown away.

The new approach uses two different kinds of additives. The spray is divided into two portions, each receiving a different polymer substance. One gives the solution a negative electric charge; the other causes a positive charge. When two of the oppositely-charged droplets meet on a leaf surface, they form a hydrophilic (water attracting) “defect” that sticks to the surface and increases the retention of further droplets.

Leaves of many plants have a natural tendency to be hydrophobic (water repelling), which is why they often cause droplets to bounce away. But creating these tiny hydrophilic bumps on the leaf surface strongly counteracts that tendency, the team found.

When the MIT team began studying the problem of pesticide runoff, which is a major agricultural problem worldwide, they soon realized that part of the reason for the limited success of earlier attempts to address the problem was that the droplet bouncing happens so quickly, in a matter of milliseconds. That means that most countermeasures, especially those based on chemical properties, just didn’t have time to make much of a difference. “So we thought, what else can you do? And we started playing around with charge interactions,” Varanasi says.

They found that the combination of the two different polymer additives “can pin the droplets” to the surface, “and this all happens during the time it’s spreading,” before the droplets starts a retraction that leads to their bouncing away, according to Varanasi.

The project was developed in collaboration with the MIT Tata Center for Technology and Design, which aims to develop technologies that can benefit communities in India as well as throughout the developing world. Spraying of pesticides there is typically done manually with tanks carried on farmers’ backs, and since the cost of pesticides can be a significant part of a farmer’s budget, reducing the amount that’s wasted could improve the overall economics of the small-farming business, while also reducing soil and water pollution. Decreasing the amount of pesticide sprayed can also reduce the exposure of farmers to the spray chemicals.

Based on the laboratory tests, the team estimates that the new system could allow farmers to get the same effects by using only 1/10 as much of the pesticide or other spray. And the polymer additives themselves are natural and biodegradable, so will not contribute to the runoff pollution.

The new approach would require only minor changes to the existing equipment that farmers use, to separate the pesticide into two streams to which small amounts of each polymer could be added. The polymers themselves are extracted from common, low-cost materials that could be produced locally.

“We can use normal sprayers, with two tanks at a time, and add one material to one tank and the oppositely-charged material to the other,” Damak says. The farmer “would do everything as usual, just adding our solutions.”

The researchers are also experimenting with different sprayer designs that could simplify the process further, potentially eliminating the need for two separate tanks.

The next step, Damak says, is to take the results that have been demonstrated at a laboratory scale and develop them into a practical system that can easily be implemented in the field, and then carry out real-world tests on small farms in India. The team plans to carry out these tests during the coming year. Damak already has traveled through India to see exactly how small farmers are carrying out their spraying currently. “That helped me see what the conditions are on the farms and what they use for their spraying applications,” he says.

The new system “should be easy to implement, and it doesn’t require extra equipment,” he says.

In addition to pesticide spraying, the same approach could be useful in other applications, such as the spraying of water onto plants to prevent frost damage in places like Florida, where citrus crops can be severely damaged by frost but water supplies are already constrained.

The research was supported by the MIT Tata Center for Technology and Design.