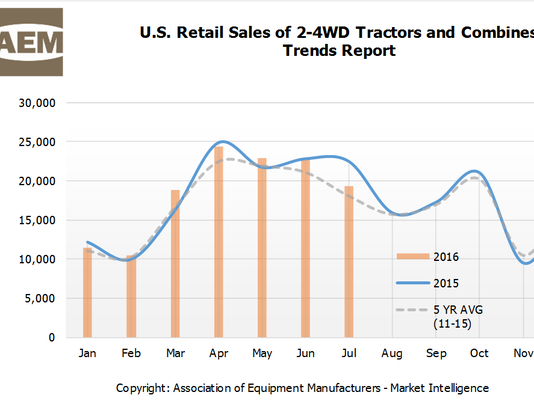 While U.S. retail sales of farm tractors under 40HP in July declined 6.3 percent, the year-to-date total was up 9.8 percent compared to last year, according to the latest monthly data from the Association of Equipment Manufacturers (AEM), the leading trade organization for off-road equipment manufacturers and suppliers.

“For the under 40 HP tractors, this is the first time in 2016 that we have seen negative year-over-year comparison for the month. For 40-100HP tractors, while 2016 year-over-year sales have fluctuated, the July decline appears to be significantly higher, and a drop this large has not been seen since October 2009," O'Brien said. "For combines, the positive growth in sales last month compared to the same month last year was not sustainable, as we are back in negative territory; Sales of larger production ag equipment continue their negative trend of the past year.

O'Brien says sales will continue to see challenges in the coming months.