A two-year winter spinach trial at the Woodman Horticultural Research Farm was conducted to determine the most suitable spinach varieties and planting dates for winter production in New Hampshire in an unheated high-tunnel environment. 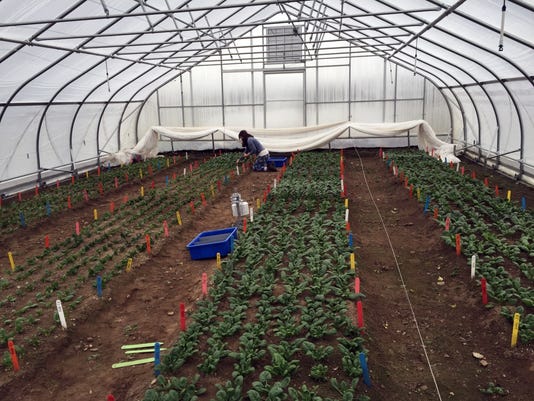 Undergraduate student assistant Talia Levy harvests spinach the week before Christmas on Dec. 18, 2015. The row cover you see at the end of the tunnel is removed for harvest and then replaced for added warmth.(Photo: Kaitlyn Orde/UNH)

Old Man Winter’s coldest months are a boon to New Hampshire growers interested in adding spinach to their winter crop. Researchers at the NH Agricultural Experiment Station have found that spinach grown in high tunnels during the coldest months of winter has the highest sugar content.

Becky Sideman, a researcher with the NH Agricultural Experiment Station and extension professor of sustainable horticulture production, Kaitlyn Orde, a graduate student in agricultural sciences, and Connor Eaton, a graduate student in plant biology, conducted a two-year winter spinach trial at the Woodman Horticultural Research Farm to determine the most suitable spinach varieties and planting dates for winter production in New Hampshire in an unheated high-tunnel environment.

“Spinach is a suitable crop for winter production in New Hampshire due to its ability to continue producing saleable leaves at very low-temperatures. Fall transplants into high tunnels can result in winter-long harvests and significant spring yields, providing an avenue for growers to meet strong consumer demand for local greens during the off season,” Orde said.

Researchers focused primarily on three spinach varieties: Regiment, Space, and Tyee, which were planted at six different dates throughout the fall. They also investigated Carmel, Corvair, Gazelle, Emperor and Renegade.

In both years, researchers found a direct relationship between temperature and sugar content, with colder temperatures in the days leading up to harvest heightening the sugar content in the leaves. The lowest sugar measurements were recorded during the warmest periods of the experiment (October, November, March, and April), and the highest measurements were recorded during the coldest months, February in particular.

Predictably, earlier transplant dates resulted in higher fall yields of spinach. For spring harvest, however, the researchers found that transplanting as late as mid-October did not negatively impact spring yields, and even the latest planting dates produced good spring yields. What this means is that the optimum planting dates will depend on the timing of growers’ markets.

Whether a grower has existing high-tunnels that are unused in the winter and may be interested in starting winter greens production, or already produces spinach but is interested in other varieties and planting dates, this study addresses the range of grower needs.

“The traditional growing season in New Hampshire is very short, limiting the period for local food production. Growing systems that allow for an extended period of production can help support agriculture in the state and supply more locally produced food on a more consistent basis,” she said.

This material is based upon work supported by the NH Agricultural Experiment Station, through joint funding of the National Institute of Food and Agriculture, U.S. Department of Agriculture, under award number 228522, and the state of New Hampshire.

Additional funding was provided by the NH Vegetable & Berry Growers’ Association. For additional information about this research, visit http://extension.unh.edu/resources/files/Resource006103_Rep8625.pdf.

Founded in 1887, the NH Agricultural Experiment Station at the UNH College of Life Sciences and Agriculture is UNH’s original research center and an elemental component of New Hampshire's land-grant university heritage and mission.

They steward federal and state funding, including support from the USDA National Institute of Food and Agriculture, to provide unbiased and objective research concerning diverse aspects of sustainable agriculture and foods, aquaculture, forest management, and related wildlife, natural resources and rural community topics. 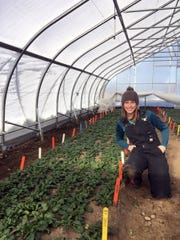 They maintain the Woodman and Kingman agronomy and horticultural farms, the Macfarlane Greenhouses, the Fairchild Dairy Teaching and Research Center, and the Organic Dairy Research Farm. Additional properties also provide forage, forests and woodlands in direct support to research, teaching, and outreach.

The University of New Hampshire, founded in 1866, is a world-class public research university with the feel of a New England liberal arts college. A land, sea, and space-grant university, UNH is the state's flagship public institution, enrolling 13,000 undergraduate and 2,500 graduate students.