NAFTA talks will be closely followed in Wisconsin

Wisconsin manufacturers, farmers and labor unions have much at stake with NAFTA negotiations

NAFTA talks will be closely followed in Wisconsin

Five days of talks aimed at overhauling NAFTA begin Wednesday in Washington, with negotiations to follow in Mexico and Canada. The renegotiations of NAFTA are sure to have an impact on Wisconsin's dairy industry, including the Lee Kinnard farm pictured here in the Town of Lincoln.(Photo: Rick Wood / Milwaukee Journal Sentinel)

From his machinist shop in West Allis, Ron Loos keeps an eye on many things — such as metal prices, the labor market and foreign trade deals.

Loos, who owns Quality Tool & Die, has seen what trade with low-cost countries has done to his business and others like it.

Often, he said, it would cost him more to buy the raw materials to make a die or a mold than what his foreign competitors would charge for the finished product.

“We’ve lived through it. We’ve dealt with it, and there’s not much we could do about it,” Loos said.

Five days of talks aimed at overhauling NAFTA begin Wednesday in Washington, with negotiations to follow in Mexico and Canada.

The United States has never before tried to rewrite a major trade agreement, so analysts aren’t sure what will emerge from the talks.

Some manufacturers want the U.S. to have more leeway to slap tariffs on imports that are found to hurt American industries. 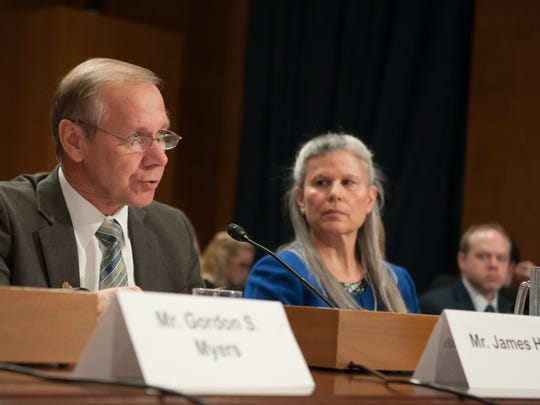 “As a starting point, I think many people in agriculture are concerned that we don’t lose what we have,” Holte said.

“Canada and Mexico are top markets for our pork, so obviously we don’t want any disruptions in our exports to those countries. We need to keep pork trade flowing,” said Ken Maschhoff, president of the National Pork Producers Council.

One of every nine tanker loads of milk from Wisconsin ends up in dairy products out of the country, with much of it going to Mexico.

Earlier this year, dozens of Wisconsin dairy farms were nearly forced out of business when they lost their milk buyer following a trade dispute with Canada.

Trump promised to settle that fight in the NAFTA negotiations.

Blake Hurst, a corn and soybean farmer and president of the Missouri Farm Bureau, says NAFTA has been good for his business and worries that he'll lose out in a renegotiation. (Photo: Nati Harnik, AP)

Dairy trade with Canada is sporadic, said Mike North, president of the Dairy Business Association based in Green Bay.

“We find ourselves in an ongoing pickle of trying to figure out how we can sell products in Canada,” North said.

Trump has promised to renegotiate NAFTA or walk away from it.

But a new version of the 23-year-old trade agreement would require approval from a divided Congress, and even an improved version wouldn’t restore millions of lost manufacturing jobs.

An aggressive approach to the negotiations risks imperiling some benefits that Americans say the trade deal provided them.

Also, forging a complex agreement could be even more difficult given that next year brings congressional elections in the U.S. and a presidential election in Mexico.

“I think the NAFTA negotiations are going to be basically a non-event where all sides give a little and gain a little,” said Bruce Bittles, chief investment strategist at Milwaukee-based Robert W. Baird & Co. Inc.

Trump is a strong negotiator, and the timing is “about right” for a new version of NAFTA, according to Bittles.

“But I think what’s really important in this country now is that consumer confidence is at its highest level since 2000. Small-business confidence, which may be even more important, is at a 15-year high,” Bittles said.

For labor unions, few things have been more despised than NAFTA.

“When it was passed in Congress, over our strong objections 24 years ago, workers in the U.S., Canada and Mexico were told that it would be good for them. But NAFTA has cost hundreds of thousands of jobs, as U.S. companies shift production to Mexico, a country that has repeatedly failed to honor fundamental human rights, like the right to form a union or be free from discrimination,” Robert Martinez Jr., president of the International Association of Machinists and Aerospace Workers, said in an email to the Milwaukee Journal Sentinel.

“Since NAFTA was implemented, aerospace companies and their suppliers have moved to Mexico to take advantage of weak laws and a workforce that is paid around $3 an hour. And there are are now over 35,000 aerospace workers in Mexico,” Martinez said.

The Associated Press contributed to this report.