Collectibles were sometimes made to fool people. 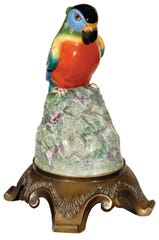 This rare bird, a ceramic parrot, conceals the working parts of a radio loudspeaker made in 1927. It substituted for the large horn used to amplify the sound of the radio and sold for about $900. (Photo: Cowles Syndicate Inc., Auction Team Breker)

Collectibles were sometimes made to fool people. A tiny teddy bear could hide a perfume bottle. Pincushions hide beneath the fabric skirts of half-dolls, ceramic figures stitched to the skirt. Some collectible canes hid thin flasks that held forbidden whiskey to drink secretly while on a walk. And bronze statues sometimes could open to reveal a naughty scene.

In the early days of television, a ceramic black panther was really a lamp lighting the room and the TV set. But almost forgotten are the loudspeakers made for early radios that looked like statues of birds or kings, instead of the large horns usually used. Most famous were the Andia loudspeakers, their radio parts inside a metal base with a glazed pottery top.

One that was auctioned recently looked like a bright red, blue and yellow 14-inch-tall parrot. It was made by Royal Doulton & Co. of England for Artandia Ltd. in 1927. Other designs include Miss Muffet, a Persian king, a Chinese scribe and other figures that would attract buyers. It sold at Auction Team Breker, a German auction of radios, music machines and other technical collectibles, for $906.
* * *
Q. I have a tall, white pitcher with daisies painted on it and gold trim. It's marked "Bel-Terr China, U.S.A., 22 Kt. Gold." I'd like to sell it. What is it worth?
A. Bel-Terr China was founded in 1961 by Belden and Terry Ham in East Palestine, Ohio.
The company is no longer in business. Bel-Terr pitchers, about 8 inches tall, sell for under $20.
* * *
Q. I inherited two art prints from my grandfather, who was the manager of the Rialto movie theater in Louisville, Kentucky, in the 1950s and '60s. Both prints are by Reynold Brown. One is "The Dragon Fight" from the movie "The Wonderful World of Brothers Grimm" and the other is "The Stampede" from the movie "How the West Was Won." The prints hung in the theater lobby during the showing of the films in 1962. Both are signed. Can you tell me their approximate value?
A. William Reynold Brown (1917-1991) was an American artist whose work included posters for over 275 movies, covers for books and magazines, drawings for a comic strip, and oil paintings. Movie posters are collectible. Prices depend on subject, condition, size and rarity. The standard movie poster is a "one sheet," 27 by 41 inches. Brown's posters for horror movies sell for high prices. His poster for "Attack of the 50 Foot Woman," 17 x 41 inches, sold for $9,000 last year. His poster for "Creature from the Black Lagoon," 81 by 79 1/2 inches, sold for over $19,000. Most movie posters sell for under $100. Your posters won't bring high prices, but the signature, if authentic and not part of the print, may add value. Contact an auction house that has sold movie posters to see what they might bring. It will help to have the provenance mentioning the movie theater.
* * *
Q. I was invited to a 1969 costume party, so I searched my closet for something I wore 50 years ago. I found a lumber jacket that was decorated with tiny toy cars that looked a lot like Match Box or Hot Wheels cars but a little smaller. Are they salable today? About 30 are stitched onto an embroidered "road."
A. The jacket sounds like the perfect thing to wear to a costume party, but don't tell anyone your tiny cars are too new for the party. Micro Machines, the best-selling toy car, were introduced in 1987 by Galoob, and new ones were made every year until 2008. They made all sorts of model cars, trucks, planes, tanks, even helicopters and motorcycles. The line was sold to Hasbro, and the cars were discontinued until a revival in 2015-2016. The cars should say Micro Machines or Galoob on the bottom. They sell today for about $5 each, although some sets, like "Aliens," are priced $50, and "Star Trek" and "Star Wars" also sell for more.
* * *
Q. My uncle owns an accordion that has "Fratelli Luigi, Made in Germany" written on the case. He's had it since the 1930s. The maker's name appears to be Italian, but it says the instrument was made in Germany. Can you give us any information about the maker and possible value?
A. The first accordions were made in Germany in 1829. By the late 1800s, they were being made in several other countries. Many fine accordions were made in Italy and some manufacturers from other countries used Italian names on the accordions they made. Fratelli Luigi is a name used on some accordions made by Gebruder Ludwig, a German company founded in 1844. It began making accordions in 1889. The names Gebruder Ludwig and Fratelli Luigi translate to "Louis Brothers" in English. The value of your uncle's accordion depends on the condition, size and other factors. You should take it to a music store that sells accordions to get an idea of value.
* * *
TIP: When packing a piece of pottery for shipping, look at the shape. If it has a hollow space larger than 1 inch across, fill the space with sponge, foam or bubble wrap.
* * *
Terry Kovel and Kim Kovel answer questions sent to the column. By sending a letter with a question and a picture, you give full permission for use in the column or any other Kovel forum. Names, addresses or email addresses will not be published. We cannot guarantee the return of photographs, but if a stamped envelope is included, we will try. The amount of mail makes personal answers or appraisals impossible. Write to Kovels, (Name of this newspaper), King Features Syndicate, 628 Virginia Dr., Orlando, FL 32803.
* * *

The 320 color labels picture American Indians, famous people, everyday and well-known buildings and familiar and not-so-familiar symbols. Learn how to identify and date labels or just enjoy the rare pictured labels (hardcover, 224 pages). Out-of-print but available for $19.95 plus $5.95 shipping at Kovels.com. You also can call 800-303-1996 or mail a check to Kovels, P.O. Box 22900, Beachwood, OH 44122.