There were many more chair makers in the United States than in Canada, so the chairs are harder to find. 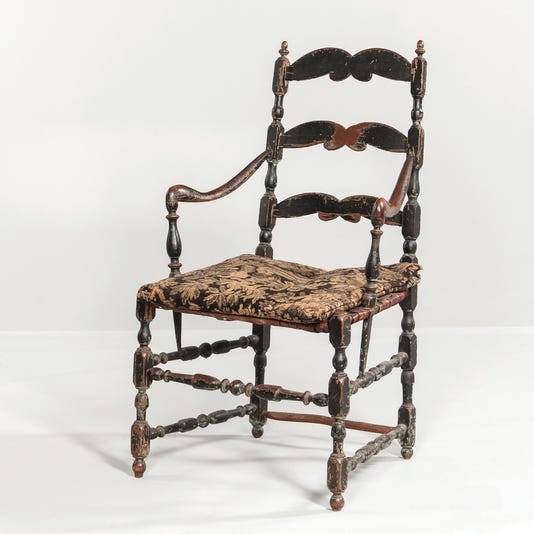 A Canadian slat-back chair is sometimes found in the United States. There were many more chair makers in the United States than in Canada, so the chairs are harder to find. This Canadian chair sold for $1,200, well over the estimated price.   (Photo: Cowles Syndicate Inc.)

Ever see an old chair that seems different — the parts are a little more curved, the stretchers between the legs have more shape and the seat seems a little low? The informal slat-back chairs made in Canada and what would become the United States in the 17th and early 18th centuries are often very different looking. Both countries had slat-backs, but Canada was influenced by formal French designs, made in the American colonies by the English.

The back of the Canadian chair made in the late 17th century and later had three or four double scroll slats. The American chair had three to six horizontal slats that were almost straight. The turned arms of the Canadian chair went through the seat to the stretcher, where it ended in a point. The American chair's arms went to the seat. Legs that looked like a string of sausages were used in Canada, while in America, the legs were plain round or square rods, perhaps with a small foot. But the easiest clue is the seat.

A Canadian chair seat is woven splint that is 15 inches from the floor. It was made to hold a cushion that raised the seat to 16 or 17 inches, the height of an American chair seat. At a Skinner auction in Boston, a late-18th-century Canadian chair that was painted black sold for $1,200 — more than twice the estimate.
* * *
Q: My mother gave me a set of eight Wawel soup bowls approximately 45 years ago. I've never used them, and they just sit in a china cabinet. Can you tell me anything about them?
A: Wawel dinnerware was made by Porcelana Stolowa Krzysztof in the 1950s and '60s in Walbrzych, Poland. The pottery was founded in 1831 in Waldenburg, Silesia, Germany, and was called Krister Porzellan-Manufaktur. After World War II ended, Waldenburg became part of Poland. The name of the town was changed to Walbrzych, and the factory was nationalized in 1945 and became Porcelana Stolowa Krzysztof. It was privatized by 1993 and became Porcelana Krzysztof in 2010. The company is still in business. Wawel is inexpensive today. A soup bowl sells for about $5.
* * *
Q: I have an old steamer trunk made by John H. Dick, Chicago. I don't know anything about the trunk and can't find any information on this company.
A: John H. Dick was in business in Chicago, and made trunks and other travel bags in the late 1880s and later. Steamship travel became popular in the late 1800s and wealthy travelers took several trunks of clothing and other items. A steamer trunk is a flat-top trunk not more than 14 inches high that could fit under the bunk. Travelers also used larger flat-top bureau or dresser trunks, tall wardrobe trunks fitted with hangers and drawers, dome-top trunks and small trunks for special items. Trunks by Louis Vuitton or other famous makers sell for high prices, often thousands of dollars, but more common flat-top steamer trunks sell for $10 to $50.
* * *
Q: I have a "24-carat lead crystal" footed bowl, about 8 3/4 inches wide. The booklet it came with say it's called Longchamp, made by Cristal d'Arques, France. The bowl has a small "v" chip under the rim that isn't visible unless you turn the bowl on its side. When was this bowl made? Can the chip be repaired? Should I have it repaired? And what is its value?
A: The Verrerie-Cristallerie d'Arques glass factory was started in 1825 in northern France. Its brand, Cristal d'Arques Paris, was introduced in 1968, as elegant and affordable glassware. The Longchamp pattern dates from 1978. Your bowl is "lead glass" (also called lead crystal), meaning it contains at least 24 percent (not carat!) lead oxide, which adds to its clarity and brilliance. You can get the chip ground down but not "restored." Look on the internet for a person who repairs glass near you, or ask at an antique show. Longchamp bowls, 8 3/4 inches with a pedestal base like yours, sell for $39 at Replacements.com. Price would be less with a chip or a repair.
* * *
Q: I have an old book I'd like to sell. The title page says, "From Coast to Coast with Jack London, by A-No.1, the Famous Tramp, written by himself from personal experiences, First Edition." The price says "24 cents" and the copyright date is 1917. What do you think it's worth?
A: "A-No.1" was a "hobo" whose given name was Leon Ray Livingston. He traveled the rails for most of his life and was the author of several books on the hobo lifestyle. In the late 1800s, Jack London traveled the rails with Livingston. London later became a well-known writer. Livingston wrote this book of their travels after London's death in 1916. First-edition books sell for more than later editions. Value depends on condition, rarity and the desirability of the book. A bookstore or dealer in your area that sells used books might be interested in buying your book. It could be worth $100 or more.
* * *
Tip: To get candle wax off your antique table, use a hair dryer set on low heat. Melt the wax, then wipe it off.
* * *
Terry Kovel and Kim Kovel answer questions sent to the column. By sending a letter with a question and a picture, you give full permission for use in the column or any other Kovel forum. Names, addresses or email addresses will not be published. We cannot guarantee the return of photographs, but if a stamped envelope is included, we will try. The amount of mail makes personal answers or appraisals impossible. Write to Kovels, (Name of this newspaper), King Features Syndicate, 628 Virginia Dr., Orlando, FL 32803.
* * *