Tables through history - from useful to unusual

Modern tables can be found for specific tasks, some with highly unusual bases.

Tables through history - from useful to unusual 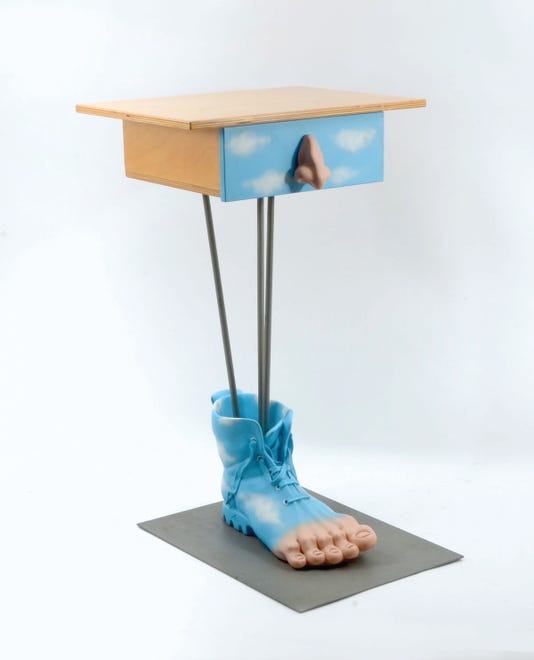 A blue boot covers the large resin foot that is the base of a very modern 25-inch-high table that sold for only $175. A conversation piece for a modern home. (Photo: Cowles Syndicate Inc., )

Ever wonder who invented the table? The earliest tables seem to have been used by the ancient Egyptians, although they did not sit near it; they used the flat top to hold things. It was not until the days of the Greeks and Romans that tables were used in a house near a seated person. By the Middle Ages, large tables were used for banquets and there were special rules about the seating.

But today we can find many tables made for specific tasks, like sewing, dining, playing games or holding a candle, a lamp or a special ornament. Tables have flat tops with three, four or more legs, or an unusual base. Twentieth-century designers became adventurous and made tables that were placed on the backs of two carved statues or on a series of geometric shaped blocks.

Perhaps the strangest table seen recently is the "Foot Art" side table. It has a flat top, one drawer with a human nose for a handle, and a resin foot for the base. The large foot in a blue boot supports the top on three metal rods stretching up from the inside of the boot. It was sold by Burchard Galleries in Florida.
* * *
Q: The Dionne quintuplets made great news when they were born in the 1930s, and I was a great fan, collecting a lot of memorabilia. I still have five silver-plated teaspoons, each with the image and name of one of the girls on the handle. What are they worth, and who might be interested in them? Are any of the quints still alive?
A: The Dionne quintuplets -- Annette, Cecile, Emilie, Marie and Yvonne -- were born in Canada on May 28, 1934. They were the first quintuplets to survive. Their family was poor and already had five other children when they were born. In 1935, they were made wards of the government and moved to the Dafoe Hospital and Nursery under the supervision of the doctor who delivered them, Dr. Allan Roy Dafoe. Millions of tourists visited the Dafoe Hospital and Nursery, where they could watch the girls play. In 1943, the girls went back to live with their family. Thousands of dolls and souvenirs were made picturing the quintuplets at different ages. Carlton Silverplate Co. made a set of spoons when the girls were six years old. Palmolive Soap offered them as a premium, one spoon for two bands from Palmolive Soap bars plus 10 cents. Emilie died in 1954, Marie in 1970 and Yvonne in 2001. Annette and Cecile still live in Canada. Most people today have forgotten or have never heard the story of the Dionne quintuplets. The value of your spoons is about $25.
* * *
Q: My brother bought a figurine for me at an estate sale. He paid $10 or $20 for it. The lady said it was made by Lladro, but we learned it is not. The figurine is a woman in a long blue dress with a white dog next to her. She has an umbrella hanging from one of her arms. I'm interested in the name of the porcelain company that made it and what it is worth. It's about 7 3/4 inches high and has a crown over the letter "S" marked on the bottom.
A: Your figurine was made by the Carl Scheidig porcelain factory, which was established in Grafenthal, Germany, in 1906. Figurines, decorative porcelain and gift items were made. The company was nationalized from 1972 to 1990 and concentrated on making figurines. It is still in business in Grafenthal, now operating as the Grafenthal Porcelain Factory. This mark was first used in 1990 and is still in use. Figurines like this, with long, graceful lines similar to Lladro, sell online for about $10 to $20, just what your brother paid.
* * *
Q: I inherited two oil paintings by Stuart Scott Somerville. One has a label on the back that says: "A Muted Bunch." I think they need cleaning. They both are about 29 by 24 inches and have the original gilt frames. I looked at the cost of cleaning a long time ago and found it expensive. Also, the restorer wants them reframed. My mother may have purchased them in London a long time ago. During World War II, they were hidden in China and eventually shipped to her. How much are they worth?
A: Stuart Scott Somerville (1908-1983) was a British artist. His paintings sometimes sell at auctions. Art galleries and museums have access to past sales and can help you find what his paintings have sold for. They also can refer you to reputable restorers in your city. Cleaning the paintings may add value, but don't reframe them. The original frames add value.
* * *
Tip: Use your phone camera at a flea market. Record things you might want to buy later. Record marks, etc. to look up.
* * *
Terry Kovel and Kim Kovel answer questions sent to the column. By sending a letter with a question and a picture, you give full permission for use in the column or any other Kovel forum. Names, addresses or email addresses will not be published. We cannot guarantee the return of photographs, but if a stamped envelope is included, we will try. The amount of mail makes personal answers or appraisals impossible. Write to Kovels, (Name of this newspaper), King Features Syndicate, 628 Virginia Dr., Orlando, FL 32803.
* * *