Painted glass shade lamps can sell for thousands of dollars

Lamps with reverse-painted glass shades, colored glass and metal-trimmed shades, aren't as expensive as Tiffany lamps but are important and valuable.

Painted glass shade lamps can sell for thousands of dollars 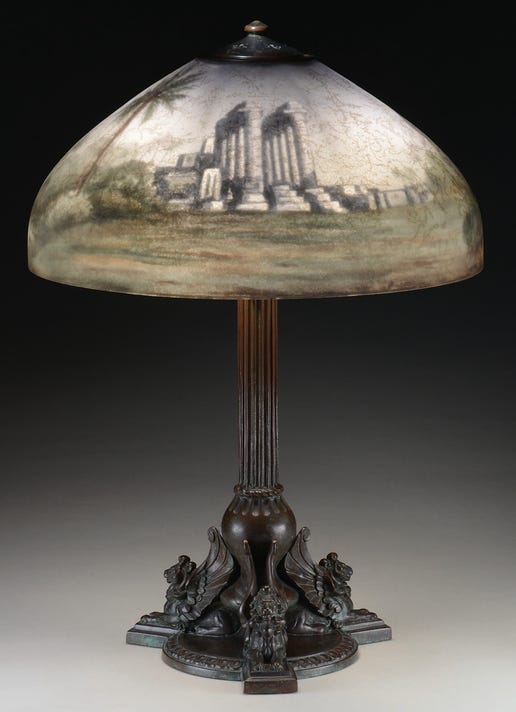 The first Tiffany lamps with dome-shaped stained-glass shades were made in 1895. They became very popular and very expensive. Other lamp and glass companies adapted the idea and made less expensive reverse-painted glass shades, colored glass and metal-trimmed shades, and copies of the originals. None are as expensive as the originals today, but some are considered important and sell for thousands of dollars.

Philip Julius Handel made lamps in Meriden, Connecticut, from 1893 to 1933, and his reverse-painted shade lamps are now selling for up to $8,000. Almost all of his lamps are signed on the inside of the shade and on the metal lamp base. Price is determined by the design on the shade and the shape of the bronze base.

A recent Morphy Auctions of Pennsylvania sold a Handel "Elephantine Island" table lamp with a bronze base held by three winged griffins. The shade is a painting of the ancient Egyptian ruins on Elephantine, a small island on the Nile. The lamp sold for $5,248.
* * *
Q: Can you give me an idea of the value of my Hunzinger rocking chair? It's a platform rocking chair with a twisted wood frame and a worn padded and upholstered back with headrest, arms and seat.
A: George Hunzinger emigrated to the U.S. in 1855 and began to make furniture in New York City. He was an innovative designer of Victorian patented furniture, and known for carved twisted legs and arms, big beaded decoration and a complex rocking mechanism. Many Hunzinger pieces are signed with a label or tag, and many are not. But often you can find some notation of the patents used by Hunzinger that can be used to help with identification and date. Hunzinger platform rockers auction from $150 up to about $500. Rockers with extraordinary detail in excellent condition and in a recognizable pattern sell for more. Your rocker would be $200 to $250.
* * *
Q: I have a brown and green glazed Weller bowl with a figural squirrel on the rim. It's about 5 inches high and 7 inches long. Is the squirrel glued or molded onto the bowl?
A: The squirrel is molded then added on the rim of the bowl. It's attached the same way a handle is attached, by first scoring and "slipping" the surface of the two parts to be joined, then pressing the two parts together. It is not glued but held by working the still-damp clay. Your bowl is part of Weller's Woodcraft line, which was introduced in 1928. It included pieces with matte glaze and natural-looking tree stumps, logs and realistic animals.
* * *
Q: My father left me his collection of Zane Grey books when he died in 1982. It consists of about 72 books all bound in tan covers with blue and red trim and book titles written in gold. Most have copyrights in the 1940s. The publisher is Walter J. Black. Does this set have value?
A: Zane Grey was born Pearl Zane Grey in Zanesville, Ohio, in 1872. He was a semi-pro baseball player and dentist who started writing in his spare time. He became a best-selling author of Westerns. His first book was published in 1903. Several books were published after he died in 1939. First editions with dust covers sell for the highest prices. Reprints of 73 of the books, a first edition ("The Camp Robber"), and a biography of Zane Grey were published by Walter J. Black, Inc. of Roslyn, New York. Millions of copies were made and sold in the 1950s and '60s, and only "The Wolf Tracker" and "The Camp Robber" get a high price. Most of the reprints sell for $1 or $2 each. For more information, see Zane Grey's West Society website: www.zgws.org.
* * *
Q: My wife was a collector of mustache cups and she accumulated about fifty of them before she died. I'm not sure what to do with them and would like to know if they have any value.
A: Mustache cups were popular from 1850 to 1900 when large, flowing mustaches were popular. A mustache cup had a ledge of china or silver that kept the hair out of the liquid in the cup and kept the mustache wax from melting. Mustache cups have sold at auctions in the past year for about $30 to over $100. Left-handed mustache cups are rare but have been reproduced. Left-handed mustache cups have sold for over $400. You can consign your collection to an auction house or contact an antiques store in your area to see what they will offer you for them.
* * *
Q: I have six Associated American Artists prints from different artists that my grandmother originally purchased in the 1950s. I'm trying to figure out the best way to sell them. A quick search of the internet suggests they are worth about $500 each.
A: Associated American Artists was founded by Reeves Lewenthal in 1934 to provide works of art at affordable prices. Grant Wood, Thomas Hart Benton and other well-known artists were hired and paid $200 for a picture. Limited-edition prints were made of the work and sold for $5 in department stores and at the Associated American Artists gallery in New York. The gallery went out of business in 2000. Some prints sell at auction for high prices; others sell for under $20. Take them to an antiques store that sells prints or an auction house that has online sales of prints and paintings.
* * *
Tip: Be careful handling birdhouses, bird cages and bird feeders, old or new. It is possible to catch parrot fever (psittacosis) through a cut or even from breathing the dust.
* * *
Terry Kovel and Kim Kovel answer questions sent to the column. By sending a letter with a question and a picture, you give full permission for use in the column or any other Kovel forum. Names, addresses or email addresses will not be published. We cannot guarantee the return of photographs, but if a stamped envelope is included, we will try. The amount of mail makes personal answers or appraisals impossible. Write to Kovels, (Name of this newspaper), King Features Syndicate, 628 Virginia Dr., Orlando, FL 32803.
* * *

In each episode, Ralph and Terry share their secrets about when and where to shop, what to look for at shops and flea markets, and how to make a good buy. In Flea Market Finds with the Kovels DVD: Season 1 series, you'll see rare marbles, antique quilts, European chests and boxes, Satsuma pottery, ceramic tobacco jars, Bakelite jewelry, vintage plastic dime-store toys, Czechoslovakian glass, Big Little Books, can labels and seed packets, old prints and more!