The growth rate of organic food sales was well above that of the overall food market. 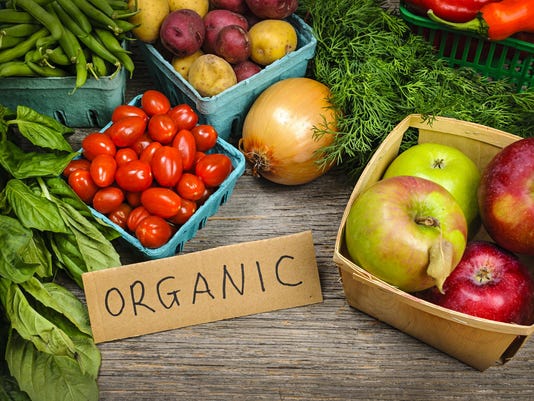 American consumers in 2017 filled more of their grocery carts with organic, buying everything from organic produce and organic ice cream to organic fresh juices and organic dried beans.(Photo: Getty Images)

WASHINGTON D.C. - American consumers in 2017 filled more of their grocery carts with organic, buying everything from organic produce and organic ice cream to organic fresh juices and organic dried beans, according to the Organic Trade Association’s 2018 Organic Industry Survey released on May 18.

Organic sales in the U.S. totaled a new record of $49.4 billion in 2017, up 6.4 percent from the previous year and reflecting new sales of nearly $3.5 billion. The organic food market hit $45.2 billion in sales, also breaking through to a new record for an increase of 6.4 percent. Sales of organic non-food products rose by 7.4 percent to $4.2 billion, setting another new benchmark.

The growth rate for organic food sales was below 2016’s 9 percent pace and was impacted by markedly slow growth in the big organic dairy and egg category. However, it was well above that of the overall food market, which nudged up 1.1 percent. Organic continued to increase its penetration into the total food market, and now accounts for 5.5 percent of the food sold in retail channels in the U.S.

“Organic has arrived. And everyone is paying attention,” said Laura Batcha, CEO and Executive Director of the Organic Trade Association. “Our survey shows there are now certified organic products in the marketplace representing all stages of the life cycle of a product or a company—from industry veterans to start-ups that are pioneering leading edge innovation and benefits and getting shelf space for the first time. Consumers love organic, and now we’re able to choose organic in practically every aisle in the store.”

Organic food does not contain most synthetic materials, such as pesticides and antibiotics. (Photo: Getty mages)

This year marks the 20th year of the Organic Trade Association’s survey. The survey, widely regarded as the most comprehensive look at the retail organic sector in America, first measured organic sales in 1997. That year, organic food sales were pegged at $3.4 billion; 2017’s sales of over $45 billion reflect a growth of nearly 15 times. In the last decade alone, the U.S. organic market has more than doubled in size.

The organic sector has thrived since the advent of a strict, comprehensive federal standard for organic and the introduction of the organic seal in the marketplace. In 1990 when the Organic Foods Production Act was signed into law authorizing the U.S.

Department of Agriculture’s National Organic Program, U.S. organic sales totaled just $1 billion. By 2002 when the final federal organic standards were implemented and the USDA Organic seal was introduced, organic sales had climbed to $8.6 billion. Fast forward to the present, and you see over 24,000 certified organic operations nationwide serving an almost $50 billion market, whose annual growth rate regularly outpaces that of the total food market.

While the growth in organic sales slowed in 2017, some slowdown in what had been an on-fire growth pace was expected. The organic market is maturing and coming of age. New channel and product expansions are becoming more incremental rather than revolutionary. Organic’s market performance revealed the maturity or different stages of development of each category in organic food, plateauing in some areas and shifting in others to reflect new trends and challenges.

The organic market is maturing and coming of age. (Photo: monticelllo, Getty Images/iStockphoto)

“The organic food market will see a steadier pace of growth as it matures, but it will continue to surpass the growth rate of the broader food market,” noted Batcha. “Demand for organic is flourishing as consumers seek out nutritious and clean food that is good for their health and for the environment. That demand is driving innovation, and there are now so many organic options that we can all eat organic for breakfast, lunch, dinner, snacks and everything in between.”

Fruits and vegetables continued to be the largest organic food category, recording $16.5 billion in sales in 2017 on 5.3 percent growth. Fresh produce accounted for 90 percent of organic fruit and vegetable sales. Sales of organic dried beans, along with dried fruits and vegetables, were a stand-out subsector in the category, increasing by 9 percent and reflecting growing demand for legumes and plant-based products.

Many producers have entered the organic dairy market over the last several years, attracted by the steady growth of the sector and the high returns for organic products. This new wave of supply, however, hit the market just as demand for organic dairy began to shift to more plant-based offerings, creating a situation of too much of a good thing.

In 2016, sales of organic food was at an all-time high of $43 billion, according to the Organic Trade Association. (Photo: Eileen Blass, USAT)

The oversupply of organic milk did have a silver lining for other dairy products: organic ice cream sales were up over 9 percent and organic cheese sales rose by almost 8 percent.

However, the requirements as written within current federal organic standards are unclear and inconsistently applied. The organic industry worked to advance the Organic Livestock and Poultry Practices rule to clarify required practices, but the rule was abruptly withdrawn by the U.S. Department of Agriculture in 2017. 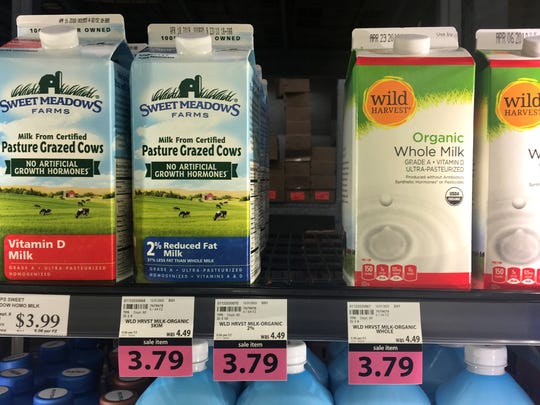 The oversupply of organic milk did have a silver lining for other dairy products: organic ice cream sales were up and organic cheese sales rose. (Photo: Mark Hoffman / Milwaukee Journal Sentinel)

USDA’s squelching of this regulation widely supported by the organic sector caused millions of consumers to question the meaning and relevance of the USDA Organic seal as it relates to dairy and egg products. This confusion and uncertainty dampened consumer demand for both organic eggs and organic dairy.

The driver in beverages was fresh juices for which sales jumped almost 25 percent to $1.2 billion and continued a multiyear double-digit growth streak. Non-dairy organic beverage alternatives in the form of almond, soy, coconut, rice and other blends also gained in popularity in 2017.

The organic non-food market grew a solid 7.4 percent in 2017, handily outstripping the 1.9 percent growth in the broader market. In the last ten years, the size of the organic non-food industry has more than doubled. Organic fiber continues to be the largest and fastest-growing sector in the category – up 11 percent to $1.6 billion -- with most of those sales in organic cotton. Organic dietary supplements rose 9 percent as demand increased for whole food or plant-based supplements.

“Consumers don’t want to eat just clean food, but they also are demanding transparency, clean ingredients and plant-based products in every aspect of their lives,” said Batcha. “The non-food organic market has made great strides, but there is still a vast opportunity for more growth in this sector."

This year’s survey was conducted from January 25, 2018, through April 22, 2018, and produced on behalf of the Organic Trade Association by Nutrition Business Journal (NBJ) with 250 companies taking part.