Keep up with changes in world of art, collecting

Today, copies of machines, pieces of buildings, or a huge hanging light bulb are displayed as outdoor statues or large indoor sculptures.

Keep up with changes in world of art, collecting 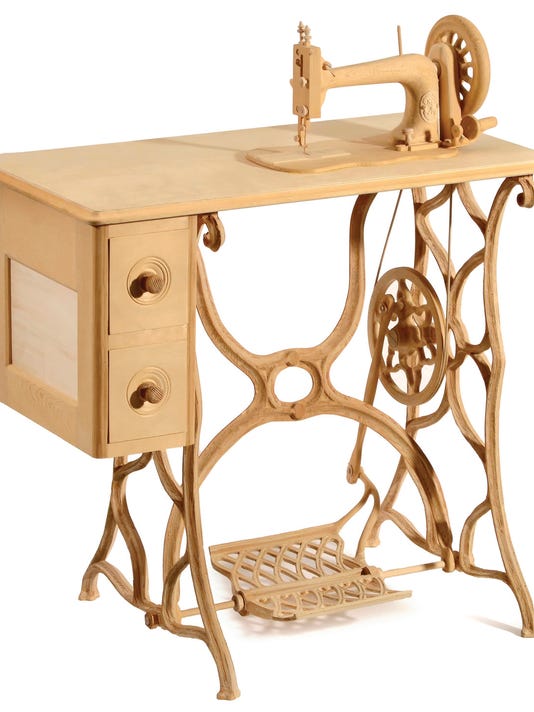 It's important to keep up with what is changing in the world of art and collecting. Fool-the-eye (trompe-l'oeil) is a popular theme in a new type of art. Today, copies of machines, pieces of buildings, a huge hanging light bulb or an enlarged comic strip or stamp pad are displayed as outdoor statues or large indoor sculptures.

Recently, a wood carving by Japanese artist Fumio Yoshimura (1926-2002) was offered by Auction Team Breker, a German gallery, in an online auction that reached the United States and most other large countries. It looks like a small Singer treadle sewing machine made in the early 1900s.

The carved machine has a Singer plaque, bobbins, fretwork, treadle, drive-belt and wheel on a base with drawer fronts, all made of linden wood. It is made as a sculpture to place in a prominent spot in the house. The artist has made other utilitarian items like typewriters, motorbikes and other mechanical objects that were created full-size. He never depicted people. It's a new type of art; however, the sewing machine didn't sell.
***
Q: Are all true Sabino pieces signed and or marked?
A: Sabino glass was designed by Marius Ernest Sabino and made in Paris, beginning in the 1920s. Production stopped during World War II and resumed in the 1960s. The factory, molds, designs and formulas were bought by Sabino's American agent in 1978. It is now Sabino Crystal Company, and its headquarters is in Houston. The glass still is made in France. It seems that all Sabino glass is marked either with an etched or molded mark. Early glass marked "Sabino Paris" was made for the French market. The mark also has been used on larger pieces. Early glass made for export was marked "Sabino France." Marks found on cheaper glass include "Verart" and "Vernox."
* * *
Q: How can I obtain an appraiser and sell an aviation relic? I have a framed piece of original fabric from the Fokker D-VII "U.10." The print states it's the second in a series of relics from the National Air and Space Museum.
A: You have a limited-edition print that is part of the National Air and Space Museum's Aviation Relic Series. Each print contains a 2-inch square of fabric from a historical aircraft in the museum's collection. The fabric was removed and replaced when the airplanes were being restored in the 1970s and early 1980s. The Fokker D-VII was a German plane flown during World War I. The pilot, Heinz von Beaulieu-Marconnay, landed the plane on an American airstrip in France on Nov. 9, 1918, two days before the armistice was signed. Von Beaulieu-Marconnay was in the cavalry before he became a pilot. The 3-feet-high "U-10" painted on the side of the plane stands for "Tenth Uhlans," his former cavalry unit. The museum gift shop might be able to tell you when this print was issued and what it originally cost. Another print from this series sold at auction recently for $270.
***
Q: I've got a Shelley butter dish with a number stamped on the back that begins with "Rd" and then "424619." The dish is marked "Late Foley Shelley England." I'm assuming it's at least 100 years old. Can you tell me how old it is and what it's worth?
A: Foley China Works started in 1860. Joseph Ball Shelley joined the company in 1862 and Percy Shelley joined the firm in 1881. After a series of name changes, the company became Shelley China in 1910. The name was changed to Shelley Potteries in 1929. The company was sold to Allied English Potteries in 1966, and merged with the Doulton group in 1971. Shelley is no longer being made. The "Rd" number is the English registry number and indicates the design was registered in 1904. The "Late Foley Shelley England" mark was used from 1910-1916, so your dish was made during that period. The value of your butter dish is under $40.
***
Q: I bought a Blair Camera Co. Folding Hawk-Eye No. 3, Model No. 1 at a tag sale. The case is wood. I can't find any information about it. Do you have any information, including its value?
A: Thomas Henry Blair, a Canadian immigrant, developed several early cameras and photography systems. He founded the Blair Tourograph Co. in Connecticut in 1878. The tourograph was a portable camera that used a wet plate to take and develop the picture. Later, it used dry plates. The company moved to Boston in 1881, and its name became the Blair Tourograph & Dry Plate Co. It became the Blair Camera Co. in 1886. Blair made cameras that used rolls of film in 1888. Blair bought the Boston Camera Company, which made Hawk-Eye cameras, in 1890. Eastman Kodak Co. bought the Blair Camera Co. in 1899, and it was moved to Rochester, New York. It became the Blair Camera Division of Eastman Kodak Co. in 1908. Your Hawk-Eye No. 3, Model No. 1 was made in about 1904. A Hawk-Eye No. 3 Combination model that used roll film or plates also was made. The Hawk-Eye No. 3, Model No. 1 originally sold for $27.50, which is worth almost $700 today.
***
Tip: Do not light a closed cabinet filled with glass with light bulbs over 25 watts. Stronger bulbs generate too much heat. Some new types of bulbs are brighter and give off less heat.
***
Terry Kovel and Kim Kovel answer questions sent to the column. By sending a letter with a question and a picture, you give full permission for use in the column or any other Kovel forum. Names, addresses or email addresses will not be published. We cannot guarantee the return of photographs, but if a stamped envelope is included, we will try. The amount of mail makes personal answers or appraisals impossible. Write to Kovels, (Name of this newspaper), King Features Syndicate, 628 Virginia Dr., Orlando, FL 32803.
* * *

If you order directly from the Kovels, you'll receive our FREE Companion eBook with ALL of the book's 20,000 prices - ready for downloading to your eReader. "Kovels" is the best book to own if you buy, sell or collect. The paperback has more than 2,500 color photographs and over 700 categories of antiques and collectibles. You'll also find hundreds of factory histories. It's available for $29.99 plus $4.95 postage.

Purchase directly from the Kovels if you want the free eBook Companion, and be sure to include your email address. And, if you order the book now, you'll receive a copy with Terry Kovel's autograph. Visit KovelsOnlineStore.com, call 800-303-1996, or write to Price Book, P.O. Box 22900, Beachwood, OH 44122.