Artists known for one type of art created many things

Emile Galle, the famous artist known for his cameo glass, designed, made and sold pottery and furniture.

Artists known for one type of art created many things 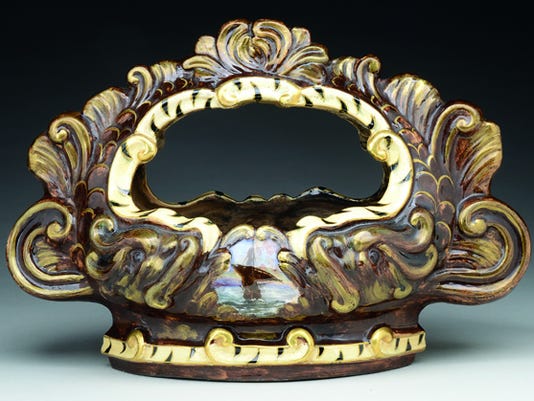 Talented artists often become well known for just one type of art when they actually created many different things. Emile Galle (1846-1904), the famous artist known for his cameo glass, designed, made and sold pottery and furniture. The glass and furniture are popular with today's collectors.

The pottery is scarce and not well-known. Galle was a leader in Art Nouveau design and a passionate botanist, yet few of the art books mention anything but his cameo glass. Galle's father had a store and sold glass and ceramics. Emile Galle studied glass making, design, botany and mineralogy, and he even served in the Franco-Prussian war. This training helped him in his commercial projects.

After his schooling, he moved back to Nancy, France, where he was born and started his own workshop. In 1874, he directed the Saint-Clement pottery and eventually moved it to Nancy. His pottery was exhibited at the 1878 Paris Exhibition, and later, he showcased both pottery and glass at another Paris exhibition.

He set up his furniture shop in 1884. The wooden pieces feature marquetry using naturalistic designs similar to those found on his cameo glass. Galle invented many new techniques for making glass, and he started the Art Nouveau style that used curved lines, shapes and natural designs with plants and animals. His Art Nouveau cameo glass was world-renowned, and he continued to study and write about horticultural subjects.

Galle died of leukemia when he was 58 after a long battle with the illness.

A large faience-handled bowl with flowers, scrolls, dolphin heads and a picture of a sailboat was auctioned at a James Julia sale in 2017. Its marked with a Cross of Lorraine and the words "Emile Galle Fecit Modele depose." (Emile Galle registered design). A similar bowl was on "Antiques Roadshow" in 2016 with an estimated value more than twice the price paid of $968.
***
Q: I have a pair of shoe roller skates with wooden wheels. There is a metal plate on the bottom with the number "5" and "Chicago Roller Skate Co., Ware Bros., Pat. Aug. 15, 1914, Made in U.S.A." What can you tell me about them?
A: Ralph and Walter Ware bought The Chicago Roller Skate Co. in 1905. Their brother, Robert, joined the business in 1909. Roller skating was a popular pastime and Chicago had several roller rinks. Skates with wooden wheels were made to skate on the wood floor in roller rinks. The company also made racing skates, clamp-on skates for skating on sidewalks, parts for skates, lawn sprinklers and a few other products. Your shoe skates probably were made between 1914 and 1920. The company was bought by National Sporting Goods in the 1990s. Vintage shoe skates like yours sell for under $200.
***
Q: We inherited a Handel lamp with a painted glass shade and are interested in finding out the value of it so we can sell it. It has a small amount of damage, but the lamp itself works. What do you think it's worth?
A: Handel lamps in good condition can sell for over several thousand dollars. Reverse-painted shades sell for the highest prices, but even a bronze Handel lamp base without the shade can sell for a few hundred dollars or more. Most Handel lamps are marked. Look for marks on the base, rim and inside the bottom of the shade. If you find a four-digit number code on the shade, you may be able to find the value online. However, damaged shades are hard to sell. Reproduction Handel shades have been made and are of little value.
***
Q: I have had an old gas stove in my basement since we moved into this house in 1989. It was hooked up to the gas, so it was still working when we moved in. The stove has since been disconnected and not used. How can I tell if it's considered an antique worth anything? The brand name of the stove is Grand.
A: Grand stoves were made by the Cleveland Cooperative Stove Co. in Cleveland, Ohio, from 1909 to 1952. The company started out as the Cleveland Co-operative Hollow Ware, Stove & Foundry Company and made coal-burning stoves. It was the largest stove company in the world in the early 1900s. The company bought a line of gas ranges in 1909. The company made Grand stoves until 1952. Old gas stoves don't sell well, normally under $150. Using it can be dangerous if it's not properly installed and vented. You should have it checked out if you plan to use it.
***
Q: I found a cigar box with a red-and-gold emblem on the lid and the words "Real Fabrica de Tabacos, Punch, F. Palicio, Inc." On the bottom of the box it says "25 cigars, Hand Made in Spanish Honduras, Honduras American Tabaco, S.A." Is it worth anything?
A: The Punch brand name was first registered in 1840. Ownership has changed several times since. Fernandez Palicio & Co. bought the brand name in 1930. After the Cuban embargo began in 1962, restrictions were put on bringing Cuban cigars into the U.S., so Punch cigars were made in Honduras. Your cigar box was made after Honduras-American Tobacco S.A. was founded in 1964. The company was sold to General Cigar Co. in 1996. Cigar boxes that aren't old and don't relate to an important event or person sell for very little, usually less than $10.

Tip: Beware! We hung a 1950s L'il Abner game board on the wall near a window. The sun removed all of the yellow color in a year. The grass in the print is now blue.
***
Terry Kovel and Kim Kovel answer questions sent to the column. By sending a letter with a question and a picture, you give full permission for use in the column or any other Kovel forum. Names, addresses or email addresses will not be published. We cannot guarantee the return of photographs, but if a stamped envelope is included, we will try. The amount of mail makes personal answers or appraisals impossible. Write to Kovels, (Name of this newspaper), King Features Syndicate, 628 Virginia Dr., Orlando, FL 32803.
* * *