Selena Gomez and Cardi B are making music together.(Photo: AP)

Cardi B and Selena Gomez are making music together.

The rapper Cardi B posted an Instagram tease Friday highlighting the collaboration. The picture showed four director chairs from the new set which included one for Selena, DJ Snake and singer Ozuna.

She even featured a little directors chair for her one-month-old daughter Kulture Kiari Cephus.

Some outspoken Cardi B fans on Instagram criticized the decision to collaborate with the "Back To You" singer Gomez.

Other fans were quick to douse the negativity.

As @aubinashley wrote, "With this collab you already know whatever they cookin' is gonna be FIRE 🔥🔥🔥🔥"

And user @sadiebby wrote: "All the hate comments sound like you (expletive) all on the same broken record! Selena Gomez is fire AF and if you don’t have nothing nice to say then shut the (expletive) up. I’m excited to hear DJ snake collab with these ladies 💕"

The sweetest girl in the world @selenagomez ❤️

Cardi B herself stepped in, tweeting:

"Selena Gomez is really what you think she is a (expletive) sweetheart ,sooo sweet a lay back."

Gomez posted post-session photographs on Instagram, including a picture hugging Cardi B with the caption, "Today was so fun."

During one posted video Gomez jokingly complained about her sweat from the studio performance. "But the queen looks flawless as always," she said, pointing the camera at Cardi B.

today was so fun

Cardi B is picking up right where she left off, returning to the spotlight with her VMAs appearance last week.

But Wednesday, she showed off the greatest collaboration of all, her baby with Offset. The rapper revealed a partial image with Kulture.

FacebookTwitterGoogle+LinkedIn
Cardi B on stage and the red carpet
Fullscreen 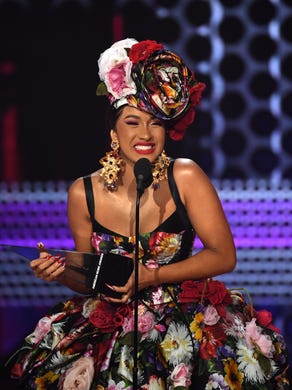 Cardi B is 26. The "Bodak Yellow" rapper has charmed the masses with her huge personality and lyrical prowess. She has also wowed designers and fans with her unique personal style. Here are a few of her best looks in honor of her birthday. Kevin Winter
Fullscreen 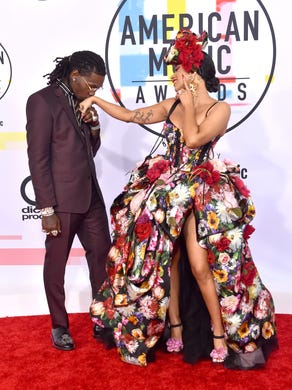 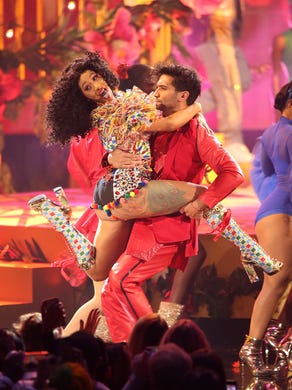 At the AMAs, Cardi performed "I Like It." Phillip Faraone, WireImage,
Fullscreen

She also took the stage at the 2018 Global Citizen Festival: Be the Generation in Central Park in New York City on Sept. 29, 2018. ANGELA WEISS, AFP/Getty Images
Fullscreen 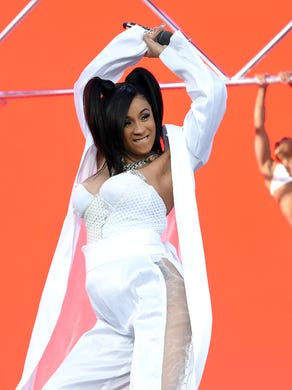 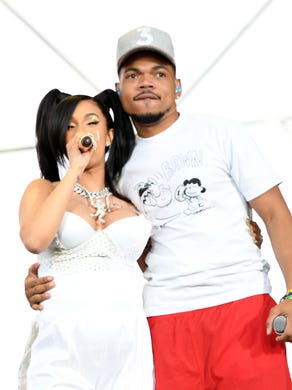 She invited Chance the Rapper onstage to perform with her. Larry Busacca, Getty Images for Coachella
Fullscreen 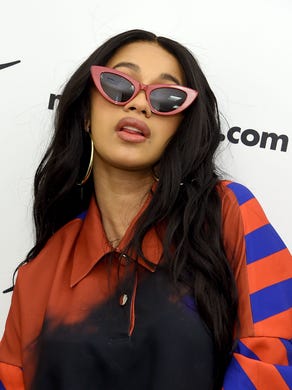 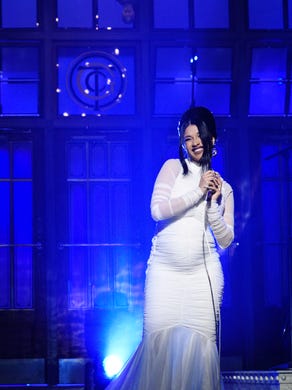 ...before revealing all in a custom Christian Siriano gown during her second set. Will Heath, NBC
Fullscreen 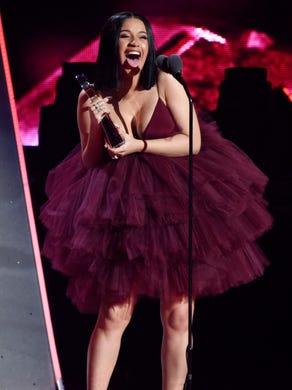 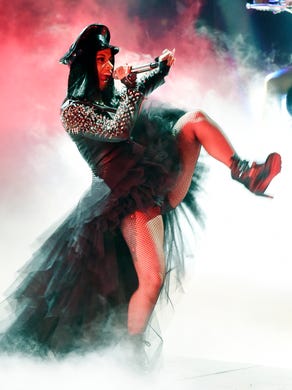 For her performance at the awards, she wore a Moschino dress with a leather moto jacket. CHRIS PIZZELLO/INVISION/AP
Fullscreen 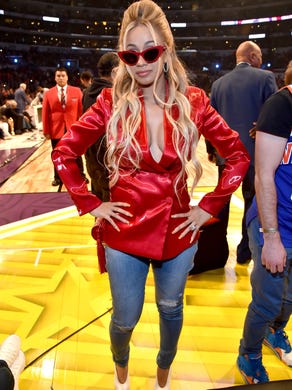 Cardi wore the cat-eye glasses that have been one of the year's top trends with a red jacket to the 67th NBA All-Star Game on Feb. 18, 2018. KEVIN MAZUR/WIREIMAGE
Fullscreen

For GQ's All-Stars Celebration on Feb. 17, 2018, she wore over-the-knee black boots and a bustier – one of her signature looks. KEVIN MAZUR/WIREIMAGE
Fullscreen 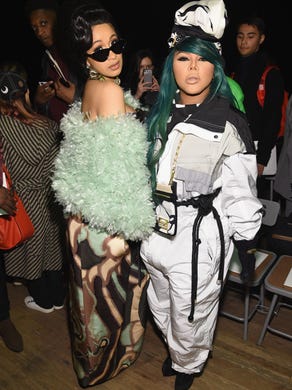 Cardi B was all over New York Fashion Week in February 2018, including front row at Marc Jacobs with Lil Kim. DIMITRIOS KAMBOURIS/GETTY IMAGES FOR MARC JACOBS
Fullscreen 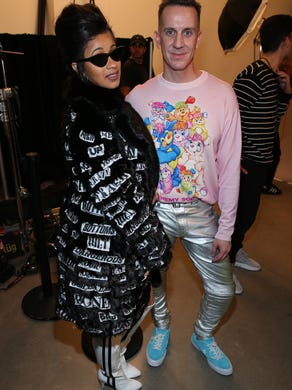 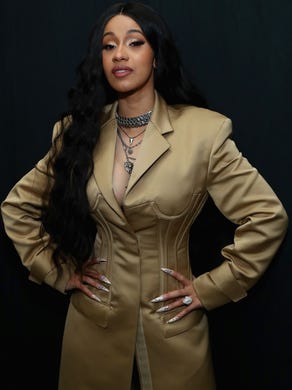 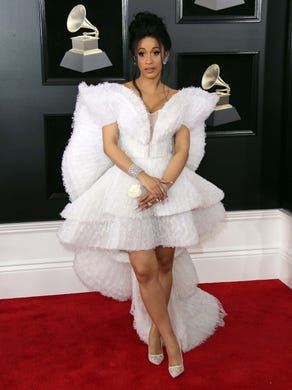 She dazzled at the 2018 Grammys in an angelic Ashi Studio dress. DAN MACMEDAN/USA TODAY
Fullscreen

The back was just as exciting as the front. DAN MACMEDAN/USA TODAY
Fullscreen 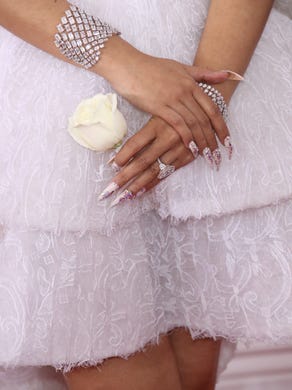 As were her signature long nails. DAN MACMEDAN/USA TODAY
Fullscreen

For her Grammys performance with Bruno Mars of their hit "Finesse," Cardi kept with the song's references to "In Living Color" with a '90s hip-hop inspired look by Moschino. ROBERT DEUTSCH/USA TODAY
Fullscreen 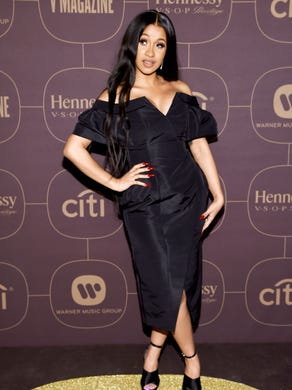 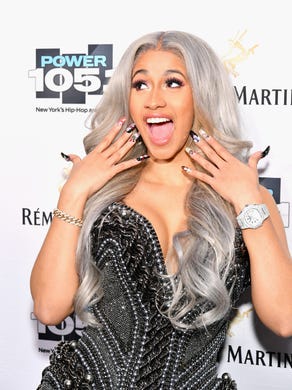 Cardi B isn't afraid to change up her hair with dramatic wigs and different colors, as she did at Power 105.1's Powerhouse 2017. DIA DIPASUPIL/GETTY IMAGES FOR iHEARTMEDIA
Fullscreen

She had a Cinderella moment in a Christian Siriano gown at the 3rd annual Diamond Ball at Cipriani Wall Street on Sept. 14, 2017. TAYLOR HILL/FILMMAGIC
Fullscreen 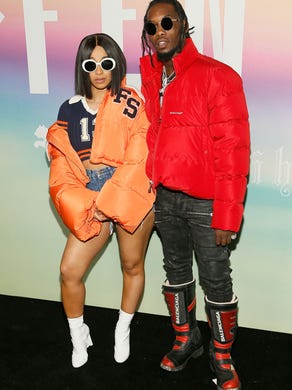 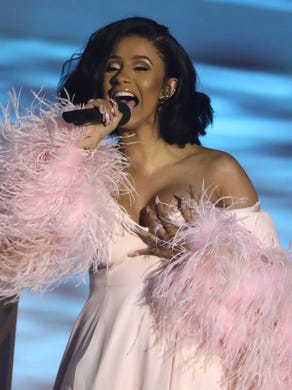 Her onstage look was girly with pink ostrich feathers at the 2017 VMAs. MATT SAYLES/INVISION/AP
Fullscreen 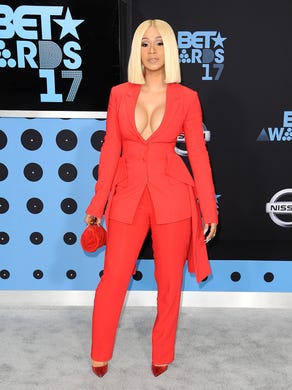 Cardi made an impression at the BET Awards on June 25, 2017, with a red Givenchy suit. JASON LaVERIS/FILMMAGIC
Fullscreen