'Call Me By Your Name' is a first love to savor

The gay romance hinges on a masterful performance by 21-year-old Timothée Chalamet, who stars opposite Armie Hammer.

'Call Me By Your Name' is a first love to savor

The coming-of-age drama Call Me By Your Name relishes young romance, the delicacy of love and the satisfaction of downing a glass of apricot juice in the gorgeous northern Italy countryside.

Luca Guadagnino (A Bigger Splash) directs an adaptation of André Aciman’s 2007 novel that chronicles the whirlwind love story between a 17-year-old youth and his father’s 24-year-old research assistant that navigates a risky proposition for both in insightful fashion and makes a bigger point out of living for the moment.

Call Me By Your Name (***½ out of four; rated R; in theaters Friday in New York and Los Angeles; expands to additional cities through December, goes nationwide Jan. 12) is also a clarion call declaring the artistry of its two leads. Timothée Chalamet has a deep and nuanced breakthrough performance as the teenager, while Armie Hammer showcases a more impressive skill set than in anything else he’s done previously.

Related: Armie Hammer, Timothée Chalamet fall in love in 'Call Me By Your Name'

Also: Will #OscarsSoWhite return in 2018? It's possible

In the summer of 1983, Elio Perlman (Chalamet) is living the good life of great food and quiet days around the pool with his archaeology professor dad Lyle (Michael Stuhlbarg) and translator mom Annella (Amira Casar). Their villa gets a guest for the season with the arrival of Oliver (Hammer), the annual American grad student helping Lyle with his work.

The core tryst is the slowest burn: While Elio enjoys a flirtatious chemistry with Marzia (Esther Garrel), a girl who quietly crushes on the Bach enthusiast, he doesn’t know what to think of Oliver. Their age gap isn't the only difference. Elio hides his Judaism; Oliver proudly wears a Star of David. Elio is a bookworm who enjoys transcribing classical music; Oliver is more of a party hearty sort. The teen shares his growing affection for Oliver only to his journal, but as they spend more time together, their attraction grows into something at first palpable and then consuming. 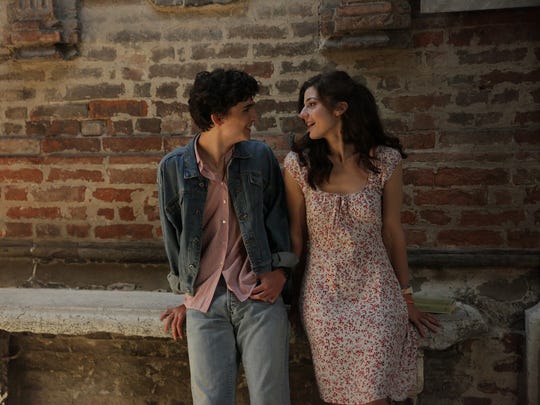 Screenwriter James Ivory treats Elio’s coming out with respect but also imbues every aspect of the central love triangle with a touching universality: There’s a definite awkwardness in Elio and Oliver’s sex scenes that’s stunning in its honesty, and Marzia's role is of consequence as she becomes caught in the middle. Like real life, even the personal decisions have wider effect.

Cinematographer Sayombhu Mukdeeprom captures the pastoral Italian setting to make the narrative feel that much more immersive, though the movie hinges on Chalamet’s knockout performance. There are some intimate moments where he notably captures the bursting sexual energy of a teen. One visually memorable instance involves self-pleasure and a peach. In the wrong hands, it’s an unfortunate American Pie reprise — with Guadagnino directing, it’s an artful peek at hormonal frustration.

Earlier: Jordan Peele says 'Get Out' is 'truth' on 'Late Show'

More: 10 holiday movies you must see, from 'Justice League' to the new 'Star Wars'

It takes a while for the dalliance between Chalamet and Hammer to feel real, though when it locks in, it propels the emotional final act of the film. Filled with bliss and hurt, Elio’s journey leads to a heart-to-heart between him and his father that is genuine, knowing and dazzling. (Stuhlbarg has surreptitiously become one of our greatest character actors and all his talents come to bear in this one virtuosic scene.)

Call Me By Your Name takes its time getting there in the course of two-plus hours — the camera meanders through the characters’ lives, and your mileage may vary when it comes to watching Hammer dance to retro pop. However, the way it explores at length the sweet and sour aspects of first love is worth savoring.