Ice cream lovers crave Babcock ice cream to the point where they will drive from across the state to buy a gallon of their favorite flavor. 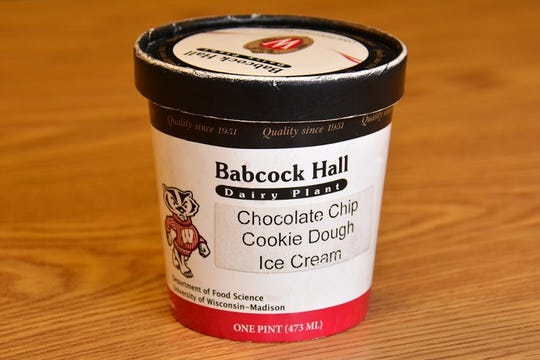 When you see a carton of ice cream from Babcock Hall Dairy Plant, it’s not particularly flashy. It’s red, white, and black. Bucky Badger appears next to a sticker that tells you the flavor — maybe its Blue Moon, Orange Custard Chocolate Chip, or Vanilla.

But does it really matter what the carton looks like? As the cliché goes: it’s what’s inside that counts.

The Babcock ice cream carton is one of the many items included in the Wisconsin 101 project, which tells the state’s history through objects.

One of the places you can find the ice cream is at the Babcock Hall Dairy Store on UW-Madison’s campus.

“My favorite flavor is chocolate peanut butter,” she said with a smile on her face.

And Jones knows students, faculty and ice cream lovers crave Babcock ice cream to the point where they will drive from across the state to buy a gallon of their favorite flavor.

“People all the way from northern Wisconsin drive down to pick up ice cream in the summer,” said Babcock Dairy Plant supervisor Raymond Van Cleve. “It’s always good to hear stories about people that come in and say, ‘We got to have Babcock!'”

Inside the Dairy Plant, students studying food science can be found making ice cream and cheese.

He added that UW-Madison isn’t looking to get rich off of Babcock ice cream, cheese and milk and compete with big markets. They simply want to educate students and advise nearby, small farms and dairy factories.

The ice cream’s recipe was created in the 1950s and hasn’t changed since. And the plant looks a lot like how it did when it opened in 1951. It’s filled with large metal vats of milk, pasteurizers, and ice cream churning tanks.

“I believe this is pretty close to the footprint of what everything was originally,” said Van Cleve as he gave a tour of the facility. “A lot of this place hasn’t really been remodeled or hasn’t been retouched since then. Some of these pieces are 50 or 60 years old.”

Although Babcock isn’t the largest dairy plant, their history is among the oldest, starting in the late 1800s.

Babcock Plant gets its name from UW-Madison professor Stephen Babcock, who played a role in developing the first butterfat test in 1890. With the butterfat test, consumers knew that the milk they purchased was high quality and safe to drink.

And Bradley says Babcock ice cream is on the denser side.

Because of Babcock’s invention, Wisconsin not only became known as America’s Dairyland, but helped his namesake ice cream become iconic.

This story is a part of “Wisconsin 101: Our History in Objects,” a collaborative public history project created through a partnership between the University of Wisconsin-Madison History Department, the Wisconsin Historical Society, and Wisconsin Public Radio’s “Wisconsin Life” program and was republished with express permission.