Here's why grocery delivery services are exploding in Wisconsin

What's old again is now new. Personal shoppers will deliver your groceries to your door, just like in grandma's day.

Here's why grocery delivery services are exploding in Wisconsin

Shipt offers grocery delivery from Meijer stores. It's one option in a wave of new pick-up and delivery options shoppers have in a changing grocery market.

GREEN BAY - Laura McKenna hasn’t had to pick out a live lobster yet, but she’s gotten pretty good at finding the right bananas.

Grocery shopping is an exercise in personal preferences. You judge the ripeness of your bananas; you make a call about what Braunschweiger to get when your favorite brand is out of stock; you decide whether to try a different tortilla chip because it's on sale.

For McKenna, a shopper in the Green Bay area for the grocery delivery startup Shipt, understanding and anticipating her customers’ wants goes with the job of shopping for them. She's gotten good.

She's still in disbelief that she's being paid to shop.

"It's hard to believe someone pays me to do what I love," McKenna said.

A century ago, milk, eggs, meat and ice each arrived by different deliveries. Today, McKenna and Shipt's staff of personal shoppers will go to Meijer for you and pick up exactly what you want.

Everything old is new, and grocery delivery is a thing again.

Across Wisconsin and the nation, grocers have introduced a range of pick-up and delivery services that allow customers to do their shopping by smartphone:

Meijer has partnered with Shipt on a fee-based delivery service.

Walmart is testing a service in Silicon Valley that would deliver your groceries and put them away, too.

And Festival Foods has introduced grocery pickup for at its Green Bay East and De Pere stores for $7.50 per order.

A 2017 PricewaterhouseCoopers survey found that Americans do much less of their grocery shopping online than they do almost any other retail sector, including books, clothing, banking and electronics. In contrast, other parts of the world have embraced online shopping: PwC found 65 percent of Chinese shoppers go online for groceries, for example.

A Shipt shopper in checks an item off of his shopping list on Friday, Oct. 21, 2016, in East Naples, Florida. (Photo: Katie Klann/USA TODAY NETWORK)

The FMI-Nielsen report suggests the transition is already happening. It found 23 percent of Americans buy food online in 2016, up from 19 percent in 2014. Among Millennials, the number increased from 21 percent to 28 percent. And 72 percent of those surveyed expect they'll be ordering online in the future.

As the grocery store of the future changes, the most noticeable thing missing from the aisles could end up being you.

Part of the 'gig economy'

For Green Bay resident Rhonda Sitnikau, a freelance production stylist and single mom in Green Bay whose work can require irregular hours, finding the time for a run to a big box or traditional grocery store, often on the outskirts of cities now, is a challenge. Sitnikau signed up for Shipt one day when she realized she was short on supplies to make lunch for her daughter.

“I’m not really an online shopper, but I was desperate,” Sitnikau said. “It was the best decision I made recently. I could be in Milwaukee at 1 p.m. and order a grocery delivery for 10 that night. I can handle everything I need to, and then my groceries arrive.”

Each service is different and has its own benefits and drawbacks.

Most have per-use fees or a membership requirement, but they all aim to cut how much time customers spend in stores through a combination of technology and on-demand employees who have fueled the explosion of the “gig economy” in which people earn extra money through use of assets such as a car or spare bedroom or spare time to shop.

Patrick Hanley, an employee at Pick 'n Save, fills a grocery order from ClickList Friday, Aug. 4, 2017, in Appleton, Wis. ClickList allows customers to order their groceries online and have them ready for pickup at the store. (Photo: Danny Damiani/USA TODAY NETWORK-Wisconsin)

Meijer Vice President of Digital Shopping Art Sebastian said services like the mega-retailer’s partnership with Shipt, introduced in Michigan more than a year ago and now spreading across the Midwest with Meijer, recognize and try to adapt to changes in culture, technology and consumers’ lives.

“The way consumers live their lives has changed. The role of technology has changed,” Sebastian said. “You can feel, touch, and smell items in our stores, but if you want to shop anytime, anywhere, you have that option, too.”

The delivery service costs $99 annually, which gets you unlimited, free orders of more than $35. (Spend less than $35 and it's $7 per order.) Membership follows you wherever you go, as long as you're within Shipt's delivery range.

“We can deliver to your office before you head home,” Shipt’s Julie Coop said. “You have an unlimited number of addresses, so we can deliver to an elderly parent or a college student. It’s a really cool, highly personalized service.”

Customers use an app or website to select the items they want and when they want them. McKenna said Shipt will tell her how much the items will cost and provides her with a credit card to cover the purchase so she's not using her own money.

Shipt Shoppers aim to deliver within a one-hour window and McKenna said the only time she miscalculated, she gave herself too much time to shop before the order was due.

There's also room for vital guidance on those bananas and lobsters. Even after McKenna is assigned an order, she gets started by contacting the “member” for any last second guidance or forgotten items to add.

“You always ask if there’s anything they wanted to add,” she said. “We can always add something.”

It may seem counterintuitive for a retail chain like Meijer, which operates 200,000-square-foot stores and is expanding across Wisconsin, to offer a service that allows shoppers to avoid their store. Sebastian countered that Meijer sees Shipt as a way to maximize revenue at local locations.

“Whether you order from Meijer or visit your local Meijer, it comes from your local store,” he said. “We’re effectively bringing the store to their door.”

McKenna has been rocking the bright green T-shirt that identifies Shipt Shoppers as such for a few months now. For every order delivered, Shipt Shoppers like her get a flat fee plus a percentage of the customer's bill and a tip, if one is proffered. But the extra income is only part of it for McKenna.

"This is like being on a TV show," she said. "I'm in heaven shopping for people."

Specifically, McKenna thinks of her second job as a turn on “Supermarket Sweep,” only with a new co-contestant for each of the 10 to 15 orders she undertakes each week. The TV game show challenged contestants to fill their carts with more valuable items than competitors. A revamped version became popular in the 1990s, but the original aired in 1965, not long after the grocery store started to render the milk man obsolete.

McKenna said the best parts of the job include that she's doing something she loves to do, the free Shipt membership and the ability to accept or decline an order based on her schedule. 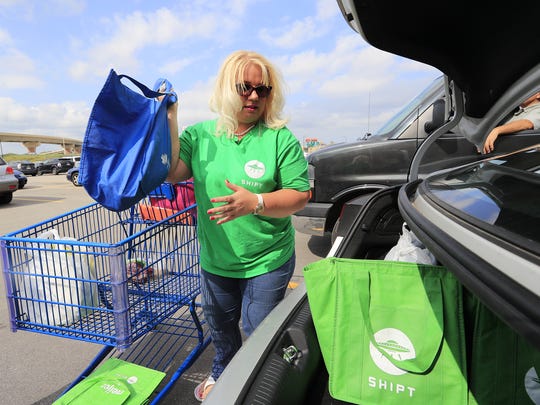 She said she likes to put herself in her customer's shoes as she shops. It's become easier as she's started to recognize repeat customers. And their pets. And if she runs into a question, they're just a call or text away.

"I like to shop for people like (I would want) someone to shop for me," McKenna said. "While they're in charge of what they're buying, it's really interactive."

She sometimes thinks she'd like to do this as a full-time job, but said there are drawbacks, chiefly that it has none of the benefits that come with a traditional, full-time job.

Over the course of an hour watching McKenna meander through the megastore on Green Bay’s west side, at least a half dozen more Shipt shoppers can be spotted in the same green T-shirt, same green reusable grocery bags, moving up and down the aisles.

Where to get your groceries delivered

Grocery delivery services and grocery pick-ups are a growing part of the market. Here are some of the ways Wisconsin customers are shopping for groceries on their smartphones: