Farming wasn't Shawn Pollack's dream but making pizza with fresh grown ingredients on the family farm is in his wheelhouse.

Tucked away on a rural farm near Van Dyne is a bustling frozen pizza business.

Poco Pizza owner Shawn Pollack spreads cheese on a pizza Tuesday on his family farm south of Van Dyne. Shawn uses the produce from the farm to make frozen pizzas in a building on the farm and sells them over the internet.(Photo: Doug Raflik/USA TODAY NETWORK-Wisconsin)

VAN DYNE - Imagine frozen pizza, delivered fresh from the farm to your doorstep.

Shawn Pollack had that dream in mind when he launched Poco Pizza this year — on a hunch and a whim — from his parents’ farm, off the beaten path in rural Fond du Lac County.

Operating as a one-man show, Pollack had hoped people would be tempted by his farm-to-table pizzas, made exclusively from locally-sourced ingredients.

He was unprepared for the explosion that followed.

Word spread, first in the unincorporated community of Van Dyne, where Pollack Dairy is located (population count of about 280 residents), and then beyond.

“It just blew up in my Appleton crowd, and the rest of my market has been split between Fond du Lac and Oshkosh,” Pollack said. “I run out of pizzas every week and can’t keep up.”

The name Poco Pizza came from a recent trip to Italy, he says, where ingredients are celebrated and allowed to shine on their own. "Poco" means "little" or "not too much."

"My pizza philosophy is to use the best ingredients and then do as little to them as possible,” Pollack said.

During a soft launch of his business back in March, the trained chef put together 500 experimental pizza creations, figuring that would get him through the first three months of orders.

“I posted a message on Facebook, asking people to try it out and let me know if my recipes needed tweaking,” Pollack said. “I sold out in about eight hours.”

This is when the small-town farmer/chef realized he could very well be in over his head but in a good way.

“I thought I would just test the market because I had my doubts about people wanting to drive out to the middle of nowhere in Van Dyne to get a pizza,” he said. “I was wrong."

Poco Pizza's little store on the farm is open Saturdays for pickup at N9017 Van Dyne Road — the only day that could be set aside on a working farm to cater to customers. The bulk of his customer base is comfortable with ordering online, so he decided to expand his reach by offering a delivery service three days a week.

Pollack's pizza circuit takes him to communities like Pickett, Johnsburg, Rosendale, North Fond du Lac, the greater Fond du Lac area and then north to Oshkosh. Delivery is available on orders over $40.

“If people aren't home they set out coolers for me, or let me know how to get to a freezer in their garage,” he said.

Much of the ingredients for Poco pizzas come straight off the farm. Meat is locally sourced, including Pollack’s own sausage, and when needed, additional produce is obtained from Park Ridge Organics outside Fond du Lac and Good Earth Farms in Oakfield. Cheese comes from Vern’s in Chilton and Grande Cheese in Brownsville.

“What I am not able to grow, I get everything from within my ZIP code or neighboring ZIP codes,” Pollack said. “It’s clean, wholesome food and I am so glad people are looking for that.” 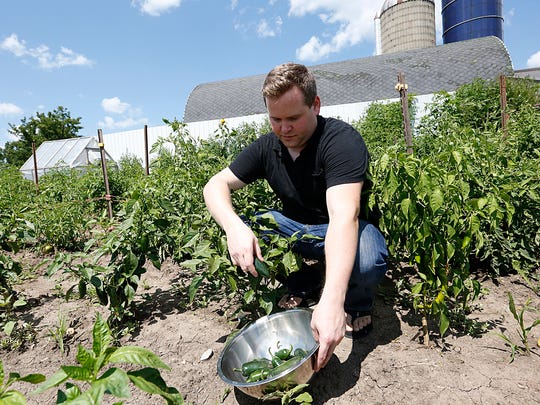 Poco Pizza owner Shawn Pollack picks peppers Tuesday on his family farm south of Van Dyne. Shawn uses the produce from the farm to make frozen pizzas in a building on the farm and sells them over the internet. (Photo: Doug Raflik/USA TODAY NETWORK-Wisconsin)

The menu changes weekly, according to what’s fresh and available. Take, for example, the “beetza,” a pizza smothered in beets and goat cheese, obtained from Pollack's neighbor-across-the-lake, LaClare Farms of Malone.

“I realized I could put that pizza together in winter with all local ingredients,” he said. “That was really my jumping off point.”

Other popular Poco creations include a breakfast pizza with bacon and eggs, the "Margherita," with fresh mozzarella and crushed tomatoes; the "Button," slathered with mushrooms from Gourmet’s Delight Mushroom Farm in Eden; a Philly cheese steak, cherry pulled pork, zucchini, fresh ricotta and prosciutto; and sausage pizzas with shaved fennel or kale.

Pollack's one exception to all local ingredients is the wood-fired, Italian pizza crust he uses, which is made in Italy.

Kori Sagmeister, of Black Wolf, was driving past the Pollack farm back in April when she noticed the sign out front. Frozen pizza? Might as well give it a try, she thought, although she didn’t have high hopes.

“The first thing I noticed when I peeled off the wrapper was the smell of all the fresh flavors. It was such a surprise,” she said. “It was so good we started texting family and friends to spread the word.”

Bonuses include a natural, sugar-free sauce, Sagmeister said, and the fact Pollack is a super fun guy. His social media savvy and witty humor are used to his advantage, on Poco Pizza’s website, with blurbs like this:

“Please alert your nosy neighbors (you know the ones) if you told me to enter your garage or home. I have quickly learned that a black truck driven by a portly guy in a black shirt carrying black delivery bags, while super stylish and clean, often gives elderly neighbors that oh-my-gosh-this-chubby-but-fun-delivery-man-must-be-robbing-them-blind feeling.” 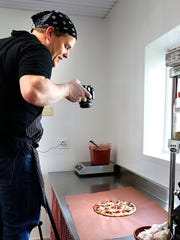 Poco Pizza owner Shawn Pollack takes a photo of a gyro pizza to be put on his businesses website Tuesday on his family farm south of Van Dyne. Shawn uses the produce from the farm to make frozen pizzas in a building on the farm and sells them over the internet. (Photo: Doug Raflik/USA TODAY NETWORK-Wisconsin)

The new entrepreneur said for now he can’t hire anyone to help him or offer his product wholesale, although restaurants and local businesses have been asking, he said. He raises his own animals and produce on less than an acre of the dairy, specializing in mule foot hogs, the rarest breed of pig in the U.S.

For the time being, Pollack said he is comfortable sleeping four hours a night and making pizzas around the clock.

The Poco Pizza creator moved back to the area, and the family farm, operated by his parents John and Lynn Pollack and brother, Ben Pollack, in 2011 to attend culinary school. Prior to that, he worked in Boston in public relations and in San Diego, where he enjoyed a career in television production.

“I discovered that cooking starts long before I pick my produce, and over the last six years I’ve been working to coax old and new flavors out of the soil. In the process I finally uncovered a genuine love for farming,” Pollack said.

He dreams of one day owning a farm with: “the red barn that’s on the picture of your box of butter. Where time stands still.”

“It's my goal to one day have a restaurant on my own farm, where food tastes like it should. Like it used to. Surrounded by naturally-raised animals, fruits, and vegetables, serving only what's raised there. And I'd love for more people to experience the small joy of drinking beer in a barn. Some day...,” he said.

More information is available at pocopizza.com.