Ariana Grande spotted with ex, shuts down speculation that she has a new boyfriend: 'It's no one'

Despite rumors that she's dating someone new, Ariana Grande is making it clear that she plans on staying single for a while.

Ariana Grande spotted with ex, shuts down speculation that she has a new boyfriend: 'It's no one' 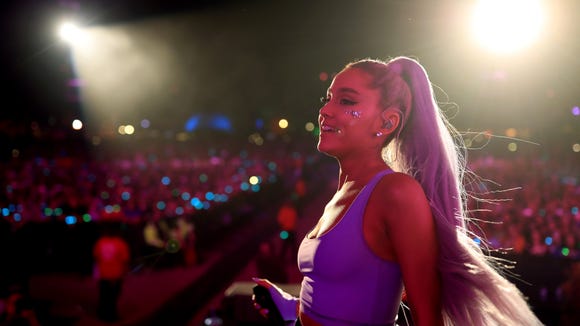 Ariana Grande wants to be clear: Despite what you might have heard, she's taking a break from the dating scene.

Buzz among fans arose Tuesday from a headline: "Who Is Ariana Grande Dating NOW?!" after the pop star was spotted with ex Ricky Alvarez. The two dated for about a year and called it quits in July 2016. He's one of the four exes Grande names in her November single, "Thank U, Next."

"Wrote some songs about Ricky / Now I listen and laugh," she sings.

Grande was quick to debunk the speculation.

"can they tell me too?" she tweeted.

A fan later joked about dating Grande, but she continued to brush off romance rumors.

But Grande wasn't having it: "spoiler for the rest of this year / probably my life: it’s no one. please refer back to this tweet for future questions."

spoiler for the rest of this year / probably my life: it’s no one. please refer back to this tweet for future questions. 🖤

The 25-year-old singer has been vocal about taking a break from love following her public split from "Saturday Night Live" comedian Pete Davidson in October. The following month, Grande released "Thank U, Next," in which she teases a new relationship, before revealing she's actually talking about herself.

"I met someone else / We havin' better discussions / I know they say I move on too fast / But this one gon' last / 'Cause her name is Ari / And I'm so good with that," she sings.

More: Ariana Grande reunites with her estranged dad after singing about him in 'Thank U, Next'

More: The biggest and best surprises of 2018 music: Cardi B, Taylor Swift, Ariana Grande and more

Davidson recently performed a stand-up routine in which he revealed he cried to his mother after the couple called it quits.

"Usually, breakup songs you know who it's about but you don't really know," Davidson said, according to E! News and The New York Times. "Bam. She named all of us."

He also recalled the day "Thank U, Next" was released, just hours before he was supposed to perform on "SNL." In the single, Grande mentions Davison by name: "Even almost got married / And for Pete, I'm so thankful." The comedian recalled it being a "sad day."

"That (expletive) came out before I had to put on a (expletive) duck hat and be like, 'derrrp here's the pizza!' So all my friends were there. …We didn't know it was going to happen," he said, according to E! 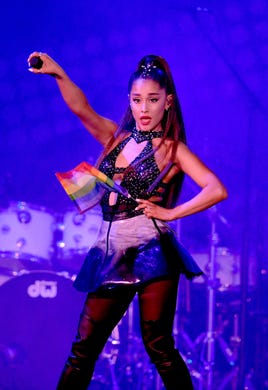 Ariana Grande and Pete Davidson made their relationship Instagram official in May. So fans were keen to see her perform at the iHeartRadio Wango Tango on June 2.  Kevin Winter, Getty Images for iHeartMedia
Fullscreen

They weren't disappointed, spotting what looked like a big rock on her ring finger. Later that month she tweeted, "Life’s too short to be cryptic n (expletive) about something as beautiful as this love I’m in. so (Pete) it is."  Rich Polk, Getty Images for iHeartMedia
Fullscreen 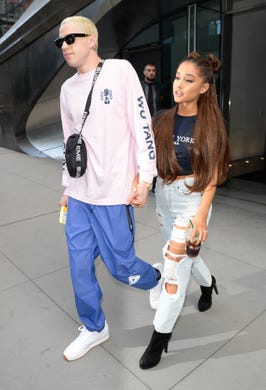 Davidson confirmed the reports they were engaged June 11 on "The Tonight Show." He told Jimmy Fallon, "I feel like I won a contest (getting engaged to her)." Raymond Hall, GC Images
Fullscreen

The two caused quite a stir at the 2018 MTV Video Music Awards in August.  Mike Coppola, Getty Images for MTV
Fullscreen 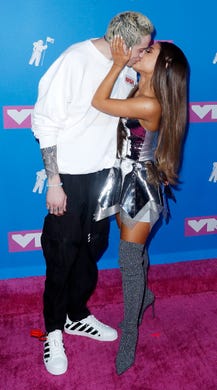 They were not shy about the PDA.  JASON SZENES/EPA-EFE
Fullscreen 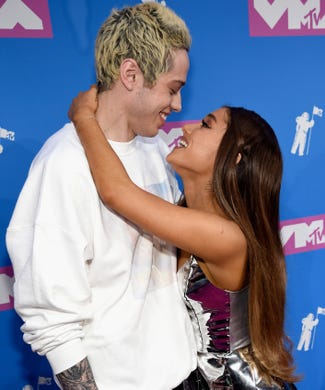 Grande released her new album, "Sweetener," on Aug. 17. In the song "Pete Davidson," she says, "Universe must have my back / Fell from the sky into my lap / And I know you know that you're my soulmate and all that." Kevin Mazur/WireImage
Fullscreen

"The day I met her, I was like, 'Hey, I'll marry you tomorrow,' " Davidson told GQ for the September issue.  Jeff Kravitz, FilmMagic
Fullscreen 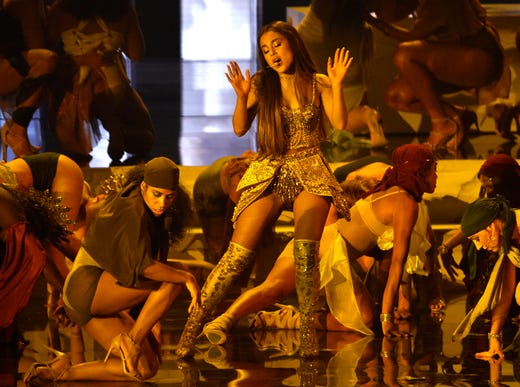 Grande performed "God Is a Woman" at the VMAs.  Chris Pizzello/Invision/AP
Fullscreen 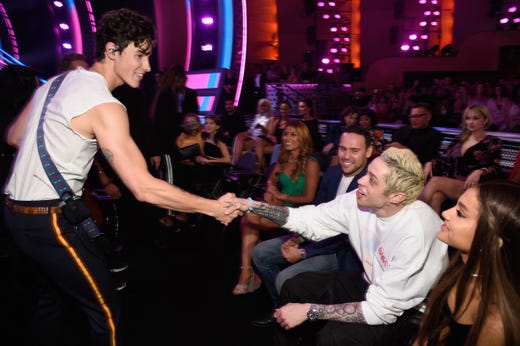 When Shawn Mendes performed, he came over to congratulate the couple.  Kevin Mazur, WireImage
Fullscreen

Grande performed "The Sweetener Sessions" to help promote her album. Here she is at one session in Los Angeles with Davidson by her side. Kevin Mazur, Getty Images for American Express
Fullscreen
Grande and Davidson traveled to Detroit to attend the funeral for Aretha Franklin in August. During the ceremony, Grande performed one of Franklin's signature hits, "(You Make Me Feel Like) A Natural Woman."  RYAN GARZA/USA TODAY NETWORK
Fullscreen 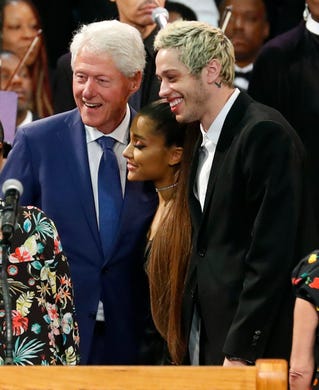 While they were at the funeral, they posed for photos with former President Bill Clinton ...  Paul Sancya, AP
Fullscreen 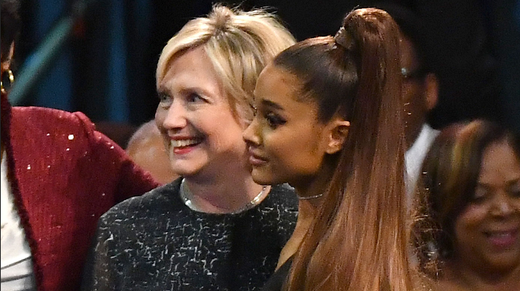 ... and with former Secretary of State Hillary Clinton.  Getty
Fullscreen 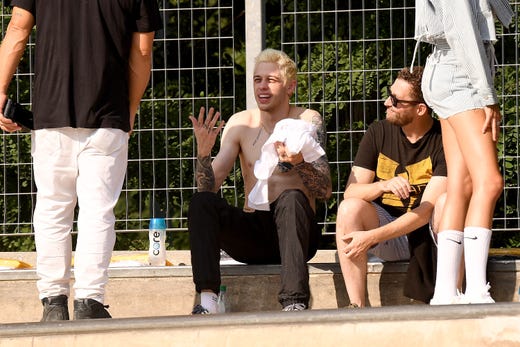 Davidson sat front row at the John Elliott show during New York Fashion Week in September. Though he said in the GQ interview that wedding plans hadn't quite come together, he insisted their walk down the aisle was "definitely going to happen, for sure." Nicholas Hunt, Getty Images for NYFW: The Shows
Fullscreen 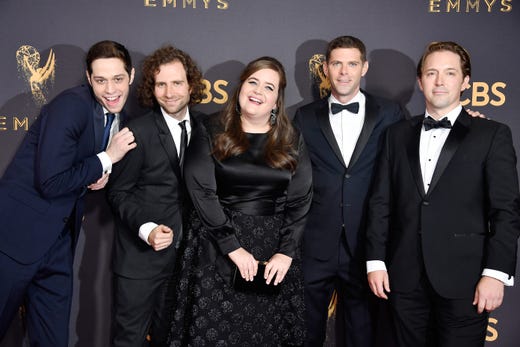 Following the death of her ex Mac Miller, Grande was a no-show at the Emmy Awards when Davidson and his fellow cast members won for variety sketch series.  Frazer Harrison, Getty Images
Fullscreen 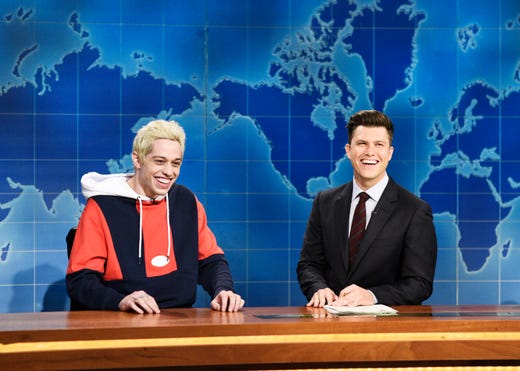 She also canceled her appearance on the season premiere of "Saturday Night Live," causing the show to scramble for a replacement musical guest. During "Weekend Update," Davidson joked about their engagement, saying, "No one can believe it. And I can't believe it. And, ah, yeah, I get it. She's the No. 1 pop star in the world and I'm that guy from 'SNL' that everyone thinks is in desperate need of more blood."  Will Heath/NBC
Fullscreen 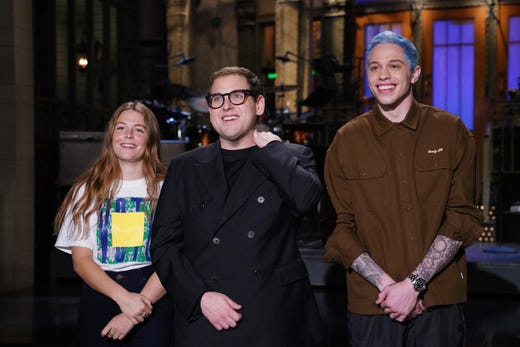 Reports emerged in mid-October that Grande and Davidson had split. A few weeks later, Davidson made light of the breakup in an "SNL" promo when he jokingly proposed to musical guest Maggie Rogers. "0 for 3," he said when she declined. Grande retaliated in a now-deleted tweet: "for somebody who claims to hate relevancy u sure love clinging to it huh"  NBC, Rosalind O'Connor/NBC
Fullscreen 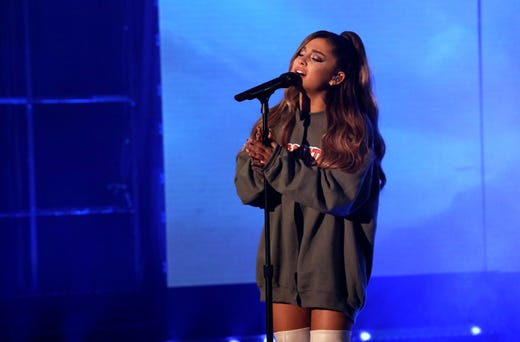 She threw further shade on November 4, releasing a new single right before "SNL" aired. The song, "Thank U, Next," called out her past relationships, including Davidson: "Even almost got married / And for Pete I'm so thankful" before launching into a snapy chorus: "Thank you, next / I'm so (expletive) grateful for my ex."  Michael Rozman/Warner Bros.
Fullscreen 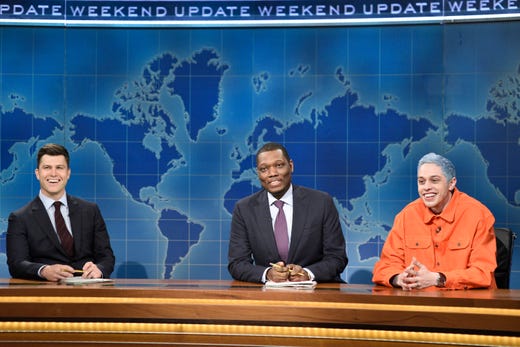 That same night, Davidson directly addressed the breakup in a segment on "Weekend Update": "I know some of you are curious about the breakup, but the truth is, it's nobody's business and sometimes things just don't work out and that's OK," he said. "She's a wonderful, strong person and I wish her all the happiness in the world."  NBC, Will Heath/NBC
Fullscreen 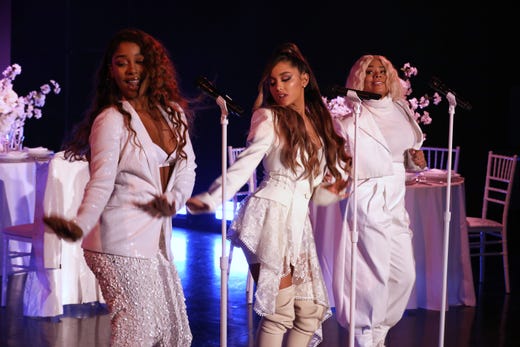 Grande went on "The Ellen DeGeneres Show" a few days later to perform "Thank U, Next" live. She seemingly sings about moving on to date someone new: "Plus I met someone else / We having better discussions," but the song later reveals that the new person she's focusing on is herself: "I know they say I move on too fast / But this one gon' last / 'Cause her name is Ari / And I'm so good with that."   Michael Rozman/Warner Bros.
Fullscreen