John Legend, Fantasia and Martha Reeves are also on board for the 60th anniversary concert, to be taped in L.A. two days after the Grammy Awards. 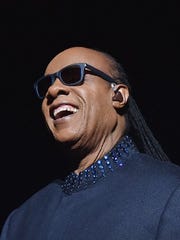 A cavalcade of Motown heavyweights will descend onto L.A.'s Microsoft Theatre next week for the Grammys' tribute to the Detroit-born record label.

Smokey Robinson, Diana Ross and Stevie Wonder are among those set to perform at Tuesday's "Motown 60: A Grammy Celebration," two days after the Grammy Awards. The Motown show will air April 21, Easter Sunday, on CBS.

Comedian Cedric the Entertainer will co-host the event with Robinson, the Recording Academy announced this morning.

The Motown celebration, coming as the company marks its 60th anniversary, is the latest in a recent tradition of Grammy-presented tribute concerts, including shows devoted to Wonder, the Beatles and Frank Sinatra.

An Aretha Franklin tribute concert was taped last month at L.A.'s Shrine Auditorium for broadcast on CBS in March.